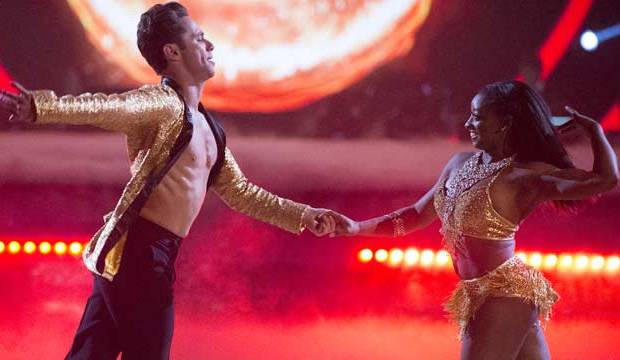 Week two of “Dancing with the Stars” saw two new stars tied for first, a heated argument about the content of one star’s routine, and a few stars who showed improvement in their scores. Fifth Harmony singer Normani Kordei and NFL star Rashad Jennings both led with straight 8s from the judges for a total score of 32 out of 40. Last week’s top scorer, Simone Biles, dropped down to fourth place, tied with Bonner Bolton.

Last week I predicted how the judges would score the contestants. Let’s look back at those predictions and also judge whether the judges got it right with the scores they gave out. Listed below is how I would rank Monday night’s performances from best to worst. After reading my analysis vote in our poll at the bottom of this post to let us know who you think gave the best performance of the night.

1. Normani Kordei & Val Chmerkovskiy (Cha Cha) – The performance of the night. I felt that Kordei was underscored last week, but this week she brought the entertainment, technique and sex appeal. And I was glad to see all the judges on the same page.

2. Heather Morris & Alan Bersten (Jive) – I thought this was an electric performance. Morris had great showmanship throughout. Although I loved the hip-hop breakdown in the middle of the routine, I knew that Goodman would be adamantly against it, so I wasn’t surprised to see him score her much lower.

3. Rashad Jennings & Emma Slater (Viennese Waltz) – Jennings keeps surprising me. I thought his Viennese waltz was intimate, vulnerable and more fluid than Bolton’s. I couldn’t take my eyes off both Jennings and Slater throughout the dance. He’s proving that he’s a serious contender for the Mirror Ball. But although I thought it was a great routine, I didn’t think it was on the same level as Kordei, whom he tied for the top score.

4. Simone Biles & Sasha Farber (Cha Cha) – I could sense hesitation from Biles. I thought the routine was full of content, but it felt forced at times. Farber needs to let Biles’s sexiness be more organic instead of trying so hard to draw it out of her. To me, it looked like they watched Erika Jayne’s provocative performance from week one and incorporated some of those moves into this routine. But while Biles was scored fairly, she performed much better than Bolton, with whom she tied.

5. Nancy Kerrigan & Artem Chigvintsev (Cha Cha) – Solid routine overall. Kerrigan lost balance a few times in the beginning. She has the skill she needs to win, but in order for her to make it far in this competition, she needs to work on controlling her nerves.

6. Erika Jayne & Gleb Savchenko (Foxtrot) – A vast improvement from last week. I thought Savchenko did a great job of including more content in their dance, and I love how fearless Jayne is with each routine. The only downside was the song choice. It was too slow and would work better for the rumba.

7. Bonner Bolton & Sharna Burgess (Viennese Waltz) – I was expecting more from this performance. Bolton and Burgess’s chemistry is red hot. He had a great frame but the movement was a bit too timid, as Goodman told him. Burgess needs to work on his movements being more fluid. This did not deserve 8s as far as I’m concerned. All 7s would have worked for me.

8. David Ross & Lindsay Arnold (Quickstep) – I figured that Ross would struggle with the cha cha. He was very entertaining but lacked a lot of authentic cha cha content. He got three 7s, but I’m not sure he deserved them. The one thing about Ross, though, is that he looks like he’s having the time of his life every week, which can be very endearing to the audience.

9. Nick Viall & Peta Murgatroyd (Foxtrot) – Much better than last week. I was glad to see Viall embrace the dance. But I will say that he was stiff throughout the dance, and it felt a bit disjointed. I agree with Hough that Murgatroyd should give him simpler choreography to master first before taking on more content.

10. Charo & Keo Motsepe (Paso Doble) – Charo dedicated her paso doble to her mother, and she was the consummate entertainer. What she lacks in technique she makes up for in entertainment and passion. There were a few times in the routine where she went off the rails a bit, but I am surprised to see how well she’s handling the choreography.

‘Dancing with the Stars’: Top 10 BEST Pro Dancers Ever

11. Mr. T & Kym Herjavek (Pso Doble) – There was more content in this routine than last week, but it lacked the attack and aggression needed for the paso doble. I hope next week we get to see Mr. T do a foxtrot or Viennese waltz.

12. Chris Kattan & Witney Carson (Jazz) – I give Kattan a lot of credit for coming on the show and baring his soul for millions of people — not to mention revealing more about his neck injury. The jazz was a great routine for him to show off his comedic chops before ultimately being sent home.

I think the couples in jeopardy will be Mr. T & Kym, Charo & Keo and Nick & Peta with Charo & Keo leaving.