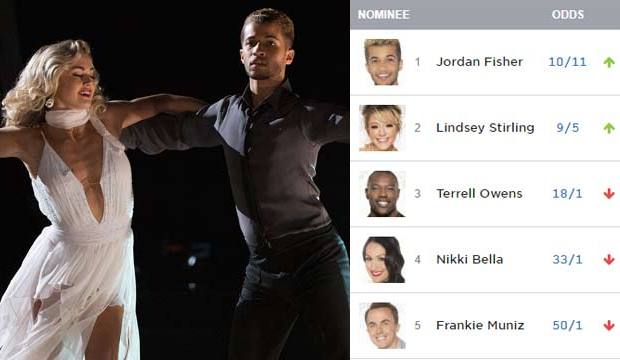 Last week on “Dancing with the Stars” Lindsey Stirling performed a sci-fi-inspired Argentine tango for “Movie Night” that judge Bruno Tonioli called “the best dance of the season, so it may surprise you that it wasn’t quite enough to put her back on top in our season-long Mirror Ball Trophy predictions. As of this writing, with “Halloween Night” coming tonight, Jordan Fisher is still the favorite to win. In fact, he has actually extended his lead from week to week.

Fisher currently gets leading odds of 10/11, which translates to a 52% chance of winning the Mirror Ball at the end of the season, compared to last week when he had 10/9 odds (47% chance of winning). He’s currently the highest-scoring competitor of the season so far just based on the judges’ marks, and though he didn’t get the high score last week on “Movie Night” he has still topped the leaderboard four times in seven episodes so far, more than any other contestant. Plus his dramatic rumba only just barely missed out on a perfect score.

Stirling holds steady in second place with 9/5 odds, or a 36% chance of winning, which is down from last week’s odds of 7/4, but only by a hair. So it looks like she’ll have to keep delivering more perfect routines if she wants to convince our readers to put her back at number-one.

Do you agree with our latest odds? Can Stirling rebound, or will Fisher coast to victory from here on out? Check out the graphs below to see how the advantage has changed hands throughout the season. Click on it for more detailed prediction stats for tonight’s episode, “Halloween Night.” 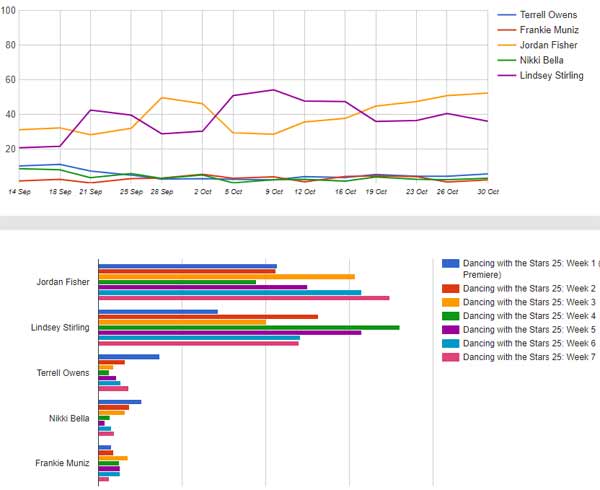