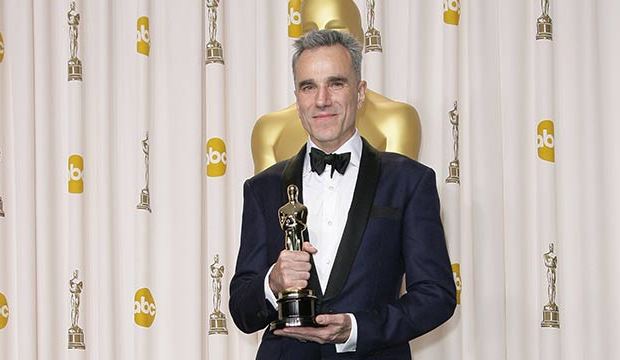 Daniel Day-Lewis, with his masterful performance in “Lincoln” (2012) as President Abraham Lincoln, has been voted your favorite Best Actor Oscar win of the decade. Two weeks ago Gold Derby asked you to vote for your preferred Best Actor winner of the 2010s and Day-Lewis earned 34% of the vote, far above any other contender.

Leonardo DiCaprio (“The Revenant”) took second place in our poll with 18% support, followed closely by Casey Affleck (“Manchester by the Sea”) at 17%. Colin Firth (“The King’s Speech”) came in fourth with 12% while Eddie Redmayne (“The Theory of Everything”) was fifth with 10%. Finishing below the others were Matthew McConaughey (“Dallas Buyers Club”) at 7% and Jean Dujardin (“The Artist”) at 2%.

Day-Lewis is in the elite club of only five other actors that have won at least three Oscars in their career, including Ingrid Bergman, Walter Brennan, Jack Nicholson, Meryl Streep and Katharine Hepburn. The method actor previously won Best Actor for playing cerebral palsy-afflicted artist Christy Brown in 1989’s “My Left Foot” and greedy oil tycoon Daniel Plainview in 2007’s “There Will Be Blood.”

The 60-year-old actor could earn his fourth Oscar this year with “Phantom Thread.” Not only is he reuniting with Paul Thomas Anderson, who directed “There Will Be Blood,” but this is also reported to be his final movie. Day-Lewis announced this summer that he was retiring from acting. What better way to honor one of cinema’s finest actors than with a farewell Oscar?