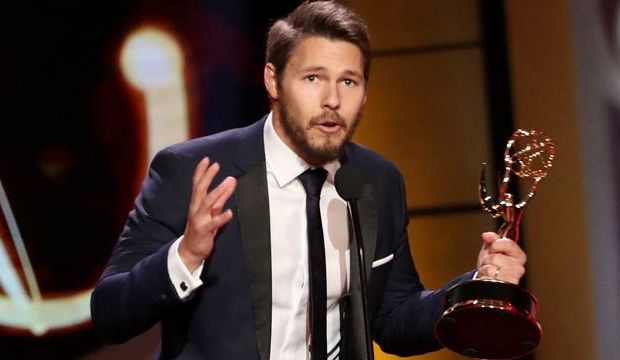 “The Bold and the Beautiful” star Scott Clifton just won Best Actor at the 2017 Daytime Emmy Awards, which were handed out on Sunday night, April 30, during a webcast that was streamed live on Facebook and Twitter. It was his first victory in that category, but his award carries even more history than that.

Clifton is the first man to win Daytime Emmys at all three acting levels: younger, supporting and lead. (The only woman to do it was his “B&B” co-star Heather Tom.) He started his daytime career with roles on “General Hospital” (playing Dillon Quartermaine, 2003-2007) and “One Life to Live” (playing Schuyler Joplin, 2009-2010), which earned him a combined four nominations for Best Younger Actor, but he didn’t win until he joined “B&B” as Liam Spencer in 2010. He earned a Younger Actor nomination for that role in 2011, and he finally won.

Two years later, in 2013, Clifton aged out of Younger Actor (the cutoff is 26) and won Best Supporting Actor on his first try. He earned two more supporting nominations after that (2014-2015), but this year he graduated to the lead contest — and once again he has won on his first try.

Remarkably, Clifton has accomplished all of this (nine nominations and three wins) and he’s still only 32-years-old — which brings us to another historic accomplishment. Clifton is now the second youngest Best Actor champ in Daytime Emmy history. The only actor to win at a younger age was Darnell Williams (“All My Children”), who was 30 when he prevailed in 1985.

Last but not least, Clifton is the first leading man to win Best Actor for “B&B.” The television academy has only ever nominated two other “B&B” stars for Best Actor: John McCook (2001, 2012) and Jack Wagner (2005). The show has had a much greater success rate in the Best Actress contest, winning it five times.

“B&B” celebrated its 30th anniversary earlier this year. Now the CBS soap has one more reason to mark 2017 in the history books. Watch the episode submission that won Clifton his Emmy here, and see the entire list of Daytime Emmy winners here.

Courtney Hope going from 'Bold and Beautiful' to 'Young and Restless': 'This seems like a good fit'…

Will Katherine Kelly Lang FINALLY take home an Emmy for 'The Bold and the Beautiful'? She's been waiting…

When are the Daytime Emmys? New dates for 2020 nominations and ceremony finally announced

Fred Willard flashback: He was beloved for his comedy, so you might be surprised what he won his Emmy…

'Bold and the Beautiful' and 'Young and the Restless' coronavirus hiatus: Here's what they'll do after…

Daytime Emmys fans divided over potential merge of younger acting races: Some say, 'I am against this…

‘The Prom’ costume designer Lou Eyrich on heightened style of Ryan Murphy musical: ‘Like reality, but with a little kick’

‘The Trial of the Chicago 7’ costume designer Susan Lyall on one iconic look: ‘It seemed really important to use it’
Must Read
Show Articles