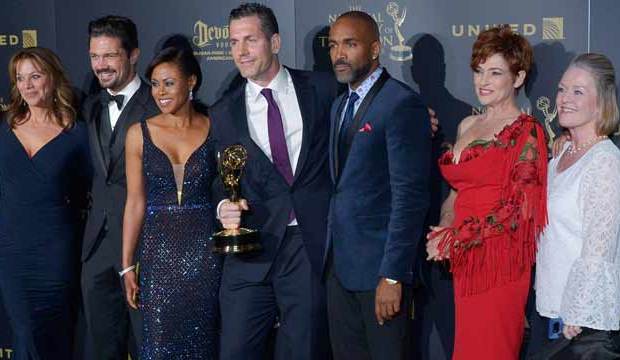 “General Hospital” only won one award at the Creative Arts Emmys on Friday night, April 28 (Best Hairstyling), but it made up for that during the main telecast on April 30, when it claimed Best Drama Series for the 13th time, extending its lead as the most awarded soap in Daytime Emmy history. Check out the complete list of winners here.

That was one of four awards “GH” won during the live webcast that was hosted by Mario Lopez and Sheryl Underwood and streamed on Twitter and Facebook. The ABC series also took Best Directing Team for the 10th time. It won Best Younger Actress for first-time champ Lexi Ainsworth; she’s the second to win that category for playing a gay character, following Eden Riegel (“All My Children”) in 2005. And Bryan Craig was awarded Best Younger Actor for the second year in a row. Overall “GH” won five awards this year.

“The Young and the Restless” also did well, prevailing three times. It won Best Actress for Gina Tognoni; that was her first victory as a leading lady, but she previously won Best Supporting Actress twice for “Guiding Light” (2006, 2008). Best Supporting Actor went to Steve Burton; that was his first win for the CBS soap as well, though he previously won for his role as Jason Morgan on “GH” back in 1998. And “Y&R” also claimed Best Writing Team for the 14th time, extending its all-time record in that category. Combined with its three Creative Arts victories, that gives “Y&R” a total of six wins for the year.

“The Bold and the Beautiful” won twice during the webcast. Scott Clifton made history by winning Best Actor. At age 32 he’s the second youngest winner in the category’s history (behind Darnell Williams, who was 30 when he won for “All My Children” in 1985). Clifton is also the first man to win all three soap opera acting awards: Younger Actor, Supporting Actor and Lead Actor. He joins his co-star Heather Tom, who is the only woman ever to accomplish that feat. In addition “B&B” won Best Guest Performer for Jim O’Heir, who is best known for his role as Jerry Gergich on the long-running NBC sitcom “Parks and Recreation.” Including Creative Arts, “B&B” won five awards total.

“Days of Our Lives” won the most awards of any drama series at Creative Arts (five), but at the main event it only prevailed in the Best Supporting Actress race for Kate Mansi, who was nominated for the very first time. But altogether “Days” won six Emmys this year, tying “Y&R” as the most awarded drama at these kudos.

More history was made in the race for Best Entertainment Talk Show: “The Ellen DeGeneres Show” won for the 10th time, breaking her tie with “The Oprah Winfrey Show” as the biggest Daytime Emmy winner for Best Talk Show. But DeGeneres doesn’t enter herself for Best Entertainment Talk Show Host anymore, so that prize went to the women of “The Talk”: Sharon Osbourne, Sara Gilbert, Julie Chen, Aisha Tyler and Emmys emcee Underwood. Watch our recent interviews with Chen and Tyler to discuss the Daytime Emmys.

‘Trollhunters’ tops Daytime Emmy Creative Arts winners with 6, ‘Days of Our Lives’ is the top drama with 5

Harvey also won Best Game Show Host for “Family Feud,” though the award for Best Game Show went to “Jeopardy!” for a whopping 16th time. Not only is that the most awards won in the category, it’s more than double the amount of the next biggest winner, “The Price is Right” (seven). “Jeopardy” started in 1964 and has been hosted by Alex Trebek since 1984.

Two other winners extended their records in their respective categories: “Entertainment Tonight” was named Best Entertainment News Program for the third time, while “Good Morning America” was honored as Best Morning Show for the fifth time.

Daytime Emmys: Will 'Jeopardy!' win for its controversial first year without Alex Trebek?

LeVar Burton explains why he doesn't want to host 'Jeopardy!' any more in Trevor Noah…

Who should host 'Jeopardy!' now that the Mike Richards saga is finally over? [POLL]