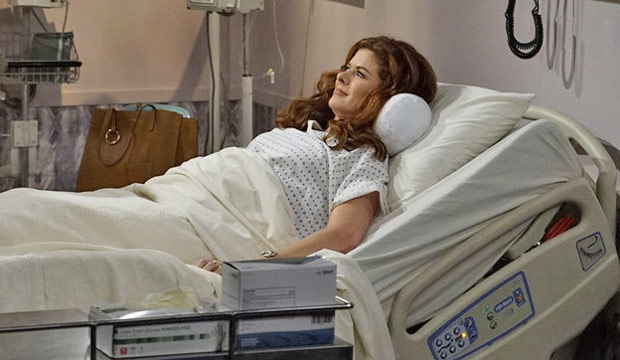 Debra Messing might finally win the Golden Globe she’s been robbed of for so many years. The “Will & Grace” star won an Emmy for her performance as Grace Adler in 2003, in addition to a SAG Ensemble win in 2001, but never a Golden Globe. This could all change thanks to NBC’s big revival of the classic sitcom.

Messing earned six consecutive Golden Globe nominations from 2000-2005 for “Will & Grace,” an astonishing feat considering the Hollywood Foreign Press Association’s penchant for snubbing shows after their first few seasons. Yet she could never nab that golden statuette. She was also nominated for “The Starter Wife” in 2008 and 2009, again, never winning. At SAG she earned two individual nominations for “Will & Grace” plus another for “The Starter Wife” and did not win there either. With all of these losses under her belt, Messing is more than overdue for a Golden Globe and individual SAG win to put next to her Emmy.

The actress is already delivering on what she did best through the first eight seasons of “Will & Grace,” which is a blend of the comedic and the dramatic. Messing notably won her Emmy for the Season 5 episode “The Kid Stays Out of the Picture,” which ends with Grace fighting with Will over their decision to have a baby. Through the revival’s first six episodes she has mostly been given broad comedic material, but one episode stands out for its dramatic elements, and that’s “Emergency Contact.”

“Emergency Contact” features Grace feeling shaken after undergoing a breast biopsy, only to have her world rocked more when her ex-husband Leo (Harry Connick Jr.) shows up to the hospital. He is still her emergency contact, and the pair proceed to spar over long-buried grievances they experienced when they were together. Messing is mostly playing everything straight but her confrontations with Leo are cut with comic relief, like Grace mocking his occasional Southern accent or knocking over an anatomical model in his office.

The episode concludes with a tearful speech in which the pair reveal how important they were to each other, with Messing showing real pathos. Of course, at the very end she sneaks in the “last word,” helping diffuse the tension. Marko Pekic (SpoilerTV) raved about Messing’s performance in this episode, writing, “Debra Messing shines throughout this outing but especially during her final scene with Leo. Her teary eyes, the sound of her voice and words she spoke were on point perfect.”

This should certainly be Messing’s submission at next year’s Emmys assuming there isn’t a more powerful episode for Grace later in the season. Not only does it showcase both her comedic and dramatic chops but it also pays off a storyline from the original series, so it may have special resonance for longtime fans. As for the Golden Globes, Messing has a strong shot given how much the HPFA loves her, and while they also love rewarding newer stars and shows, this “Will & Grace” revival could be seen as more fresh than some of its competitors. This could clear the way for Messing in Best TV Comedy Actress, where her competition may include actresses in older shows like Julia Louis-Dreyfus in “Veep” and Tracee Ellis Ross in “Black-ish.”