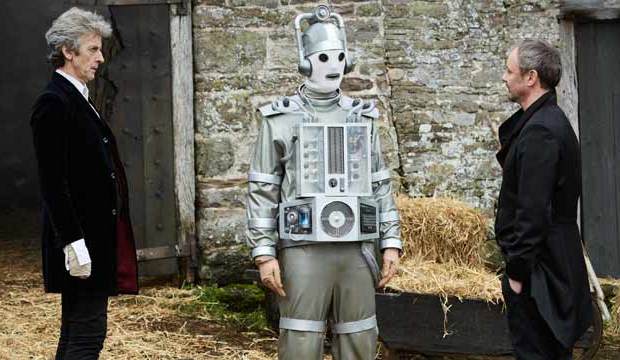 “The Doctor Falls” was an eventful finale. On-board a space station struggling to escape the gravitational pull of a black hole, the Doctor (Peter Capaldi) tried to save the survivors of the station from an assault by the Cybermen, who were gathering their strength and preparing an invasion from a lower floor. This required the Doctor to face his fellow Time Lord and nemesis Missy (Michelle Gomez), as well as Missy’s previous form, the Master (John Simm). And it will ultimately result in his self-sacrifice as the Doctor began to regenerate into his next form after being mortally injured. But Capaldi will stick around through the Christmas special at the end of the year before hanging up his sonic screwdriver.

More than a third of our readers (36%) voted for “The Doctor Falls,” followed closely by the penultimate episode, “World Enough and Time” (32%), which introduced the storyline of the doomed space station. Both of those finale episodes were written by showrunner Steven Moffat and directed by Rachel Talalay.

There was a steep drop-off between those episodes and the rest of the episodes of season 10. “Extremis” came in third place with 10% of the vote; that was the beginning of a three-part adventure in which alien monks plotted the takeover of Earth by creating an incredibly lifelike Earth simulation. Ranking fourth with 7% was the season premiere, “The Pilot,” which introduced us to the Doctor’s new companion Bill Potts (Pearl Mackie) as well as an alien liquid that followed Bill across the cosmos. And rounding out the top five with 5% was “Oxygen,” in which the Doctor and Bill tried to save a space station full of astronauts that were being threatened by their own spacesuits.

Do you agree with our readers picks? You can keep voting in our poll here. Check out the complete results below, and join the discussion on this and more with your fellow TV fans in our forums. 'Doctor Who' Emmy breakthrough led by Jodie Whittaker and ... Rosa Parks? See what's on the Emmy…

Chris Chibnall and Matt Strevens ('Doctor Who' producers): Rule #1 for the new season was 'don't break…

It's about time 'Doctor Who' was nominated at the Golden Globes

How have the various 'Doctor Who' players fared at the Emmys?

'Doctor Who' season 11 trailer from Comic Con: 'This is gonna be fun!' says Jodie Whittaker…

The 'Doctor' is in: 'The universe is calling' Jodie Whittaker in 'Doctor Who' season 11 teaser, so she…

Is there a 'Doctor' in the house? Actually there might be THREE 'Doctor Who' stars at the Emmys this…