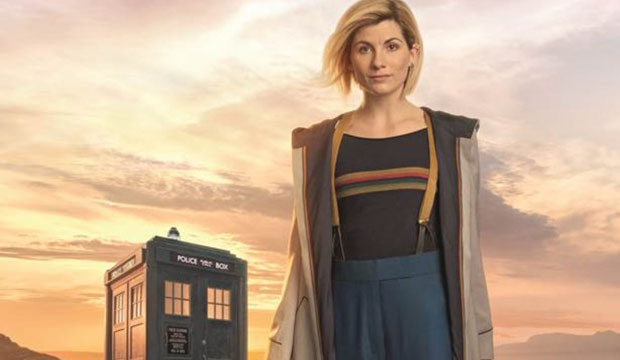 The BBC has just released the first photo of Jodie Whittaker in costume as the new “Doctor Who.” She is the first woman to play the iconic role, and the 13th in a line dating back to the 1960s. While Whittaker began shooting season 11 of the show in July, the 10 episodes won’t air until the fall of 2018. Also new to the franchise are Bradley Walsh (“Law & Order: UK”) as Graham, Tosin Cole (“Star Wars: The Force Awakens”) as Ryan and Mandip Gill (“Hollyoaks”) as Yasmin.

When news of her casting broke this summer Whittaker, who is best-known for her starring role in the crime drama “Broadchurch” opposite David Tennant (who was the 10th Doctor), readily admitted, “I’m beyond excited to begin this epic journey, with Chris Chibnall and with every Whovian on this planet. It’s more than an honor to play the Doctor. It means remembering everyone I used to be, while stepping forward to embrace everything the Doctor stands for: hope. I can’t wait.”

She replaces Peter Capaldi, who is exiting after three seasons as the time lord in an upcoming Christmas special. In parting, he paid tribute to her: “Anyone who has seen Jodie Whittaker’s work will know that she is a wonderful actress of great individuality and charm. She has above all the huge heart to play this most special part. She’s going to be a fantastic Doctor.”

Also leaving with Capaldi is Steven Moffat, who is signing off after six years at the helm. Moffat, who also launched the Emmy-winning “Sherlock,” the modern-day take on Arthur Conan Doyle‘s fabled detective Sherlock Holmes, believes that his successor is far more equipped to take over the “Doctor Who” franchise than he was. “Chris is coming on to the show with the experience of doing ‘Broadchurch.’ He’s already done a major-league, much-fussed about show, so he’s got all that experience so there’s not a lot to talk about there. We just keep each other up to date with what’s going on, and we’ve had various conversations about how the stories will work together.