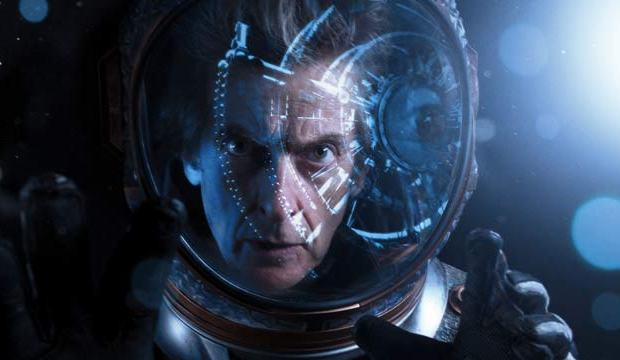 I mentioned when previewing this week’s episode of “Doctor Who,” titled “Oxygen,” that the Doctor (Peter Capaldi) hadn’t spent much time in space since the time-travelling adventurer picked up his new companion Bill (Pearl Mackie) this season. That fact wasn’t lost on the Doctor either. He not only embarked on an adventure in the depths of the cosmos, but made a special point of doing so. He has missed venturing into the void between stars, but “Oxygen” is arguably the darkest episode of the season so far, and it has lasting consequences.

Written by Jamie Mathieson and directed by Charles Palmer, “Oxygen” premiered on May 6. Read our recap below for the top five takeaways from the new episode.

Space: It’s Exactly Like Camping
“You’re missing [space] aren’t you?” says the Doctor’s alien companion Nardole (Matt Lucas), afraid the Doctor will leave Earth again despite having sworn an oath to protect a vault underneath the university (more on that below). The Doctor has just given a lecture to his students detailing the horror of being exposed to the vacuum of space — when he was supposed to be teaching them about crop rotation. “Space is great, isn’t it?” he says at the end of that lecture with a mischievous grin. Then he explains to Bill, “Going to space is exactly like camping … Too much between you and the outside, and you might as well stay home. To really feel it you need the space equivalent of a wafer-thin sleeping bag and a leaky two-man tent.” Be careful what you wish for.

For their destination the Doctor chooses to answer a distress signal because “you only really see the true face of the universe when it’s asking for your help.” That distress signal is being emitted by a mining station where most of the crew has died. There lies the most important difference between outer space and camping: if your tent malfunctions you don’t suffocate to death.

‘Doctor Who’ Emmy news: Attention Whovians, it could FINALLY be nominated for Best Drama Series

Smart Suits
We know what the stakes are well before the Doctor does. The episode begins with a pair of astronauts working on the outside of their station. Before they can both get back inside they’re ambushed by their deceased colleagues. The dead astronauts are animated by their spacesuits, which are automated by a kind of smart technology that allows them to behave independently, and now the suits have begun killing their occupants.

Such technology doesn’t seem far-fetched. In fact, it probably isn’t even far away. It seems like the next generation of the kinds of artificial-intelligence devices that companies like Apple, Amazon, Google and IBM are already making. But the spacesuits threatening the lives of the astronauts raises questions about the dangerous intersection between humanity and technology similar to “2001: A Space Odyssey” — “Siri, open the pod bay doors.” But the question is why.

The Doctor vs. Capitalism, Vol. 2
I noted in my recap of “Thin Ice” how that episode’s mystery opened up into a critique of capitalism, with a businessman feeding peasants to a sea monster for profit. This episode takes that theme to its darkest extreme. You see, the suits aren’t malfunctioning at all. They’re designed by the mining company to kill their wearers once the astronauts cease to be useful. This particular mining station is no longer profitable. Since the workers are no longer generating revenue, the company loses money by supplying them with oxygen, so the suits respond simply by killing them.

“You are just organic components, and you’re no longer efficient. So you’re being thrown away,” the Doctor explains. “The end-point of capitalism: a bottom line where human life has no value at all. We’re fighting an algorithm, a spreadsheet. Like every worker everywhere, we’re fighting the suits.” The Doctor saves the lives of the remaining astronauts by linking their vital signs to the station: their deaths will activate the destruction of the entire facility. It’s a simple change of math: now the astronauts are more expensive to kill than they are to protect. So not only do the suits cease their attack, they actually provide the survivors with extra oxygen.

So the suits aren’t really at fault at all. They’re just machines following their programming. Just like the sea creature in “Thin Ice” and the robots in “Smile,” both of which took innocent lives, the true culprits are humans. In that way “Doctor Who” has spent much of the season using technology and alien life to explore human frailties, from greed to grief to naivete. Or as Shakespeare once put it, the fault is not in our stars, but in ourselves.

After the Doctor, Bill and Nardole return to the present, the Doctor reveals, “As far as I remember, there’s a successful rebellion six months later, corporate dominance in space is history, and that about wraps it for capitalism.” So the Doctor already had an inkling about what the future held; I guess it only takes a few centuries and the intervention of a 2,000-year-old Time Lord to finally bring about a successful Marxist revolution. But the Doctor notes that after capitalism, “the human race finds a whole new mistake” — the fault in ourselves, yet again.

Dish ‘Doctor Who’ with Hollywood insiders in our notorious forums

No Sight for Sore Eyes
Though the Doctor has saved the day, it’s not without cost: during a moment of peril aboard the space station the Doctor gave up his protective suit to save Bill’s life. As the result, the Doctor was exposed to the vacuum of space for longer than any human could have survived. It didn’t kill the Doctor, but it did cause him to go blind. After leaving the station Nardole sets about repairing the Doctor’s eyes. It seems to work, but back at the university he confesses to Nardole, “I can’t look at anything ever again. I’m still blind.”

The dramatic possibilities are intriguing. How long will the Doctor remain without his sight? And how will it affect upcoming storylines? The Doctor is famous for his intellect, but a lack of vision is sure to complicate his problem-solving capabilities.

The Vault Update: Nardole Takes the Doctor to Task
Matt Lucas is primarily known as a comedic actor, and thus far Nardole has been mostly a comic foil in the Doctor’s adventures, but Lucas ended this episode with a scene of unexpected dramatic potency. “Never again,” Nardole tells the Doctor about their adventure off-world, a breach of the Doctor’s promise. “We were so close to not making it back. Then what happens to the vault? … You need to be here, and you need to be ready if that door ever opens. What if you came back injured or sick. You really think our friend down there won’t know that, won’t sense it?”

There’s nothing in this scene to dispel the prevailing theory that the Doctor’s old nemesis the Master is in that vault. After all, the Master, or sometimes his female form Missy, has nearly destroyed the world more than once — more than twice, actually. And even at his full strength the Doctor has struggled to defeat his longtime rival. So just how vulnerable is the Doctor without his eyesight?

'Doctor Who' Emmy breakthrough led by Jodie Whittaker and ... Rosa Parks? See what's on the Emmy…

Chris Chibnall and Matt Strevens ('Doctor Who' producers): Rule #1 for the new season was 'don't break…

It's about time 'Doctor Who' was nominated at the Golden Globes

How have the various 'Doctor Who' players fared at the Emmys?

'Doctor Who' season 11 trailer from Comic Con: 'This is gonna be fun!' says Jodie Whittaker…

The 'Doctor' is in: 'The universe is calling' Jodie Whittaker in 'Doctor Who' season 11 teaser, so she…

Is there a 'Doctor' in the house? Actually there might be THREE 'Doctor Who' stars at the Emmys this…