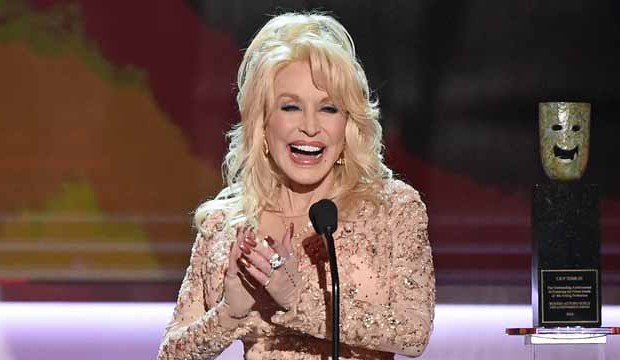 “To win it would be amazing! I would be the first to jump up on stage and get it!,” exclaims Dolly Parton about possibly winning her first ever Emmy Award this year. She is one of the nominated producers of NBC’s “Christmas of Many Colors,” which has a bid for Best TV Movie at the upcoming ceremony on September 17. In our exclusive new podcast (listen below), Parton adds, “We were surprised to even be nominated because we’re the only TV movie from a broadcast network… I’m going to go, and I already feel like a winner.”

Parton and executive producer Sam Haskell have brought young Dolly to life the past two holiday seasons on NBC with “Coat of Many Colors” in 2015 and “Christmas of Many Colors” in 2016. In our chat she says, “I was thrilled to death we got nominated! We were actually amazed we got such great ratings, and I always wanted to do this little story because people had heard my song for years. I just wanted people to know my family, and to know where I came from, and why I am the way I am…. I think people are hungry for faith-based and family-oriented shows like ‘Little House on the Prairie’ and ‘The Waltons.’ It’s been a long time.”

MAKE YOUR PREDICTION: What will win the Emmy for Best TV Movie?
To save your prediction, you must log in to Gold Derby. Click here to sign in with existing account -- or create a new one.
Both telefilms have been ratings smashes for NBC, and plans are for the broadcaster to repeat airings for many years to follow and produce more movies as well. The most recent project, “Christmas of Many Colors: Circle of Love” focused on young Dolly, portrayed again by Alyvia Alyn Lind. Her father Lee (Ricky Schroder) is away trying to earn enough money to buy his wife (Jennifer Nettles) a long-awaited wedding ring. The children decide to sacrifice their Christmas presents to bring him home and give him the money themselves. While waiting on Lee to return, the snowstorm trapped the family and almost killed them at their home in the Tennessee mountains.

Parton is a legendary performer and songwriter who has penned such classics as “Coat of Many Colors,” “Jolene,” “9 to 5,” and “I Will Always Love You.” Her most recent version of “Jolene” recorded with Pentatonix won her an eighth Grammy Award on her 46th career nomination earlier this year. Her celebrated career has also included a 1999 induction into the Country Music Hall of Fame and 2006 selection at the Kennedy Center Honors.

In our phone conversation, she also discusses the idea of reuniting with “9 to 5” co-stars Jane Fonda and Lily Tomlin to present a category at the Emmys since all three are nominated this year. She chats about the recent death of friend and country/pop superstar Glen Campbell.

And make sure you watch our extensive in-studio interview below from the spring before nominations were announced when Parton gives more details about her television movies and her career.