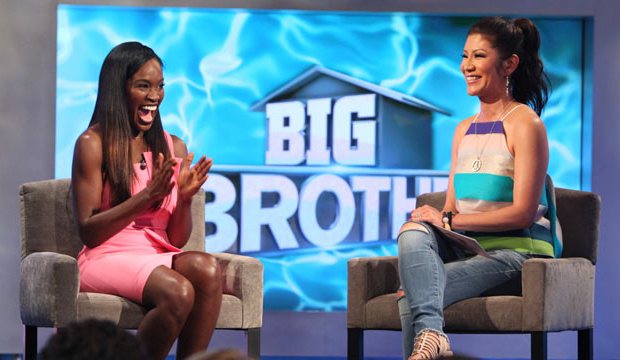 Dominique Cooper may have been evicted on Episode 11 of “Big Brother” Season 19, but host Julie Chen then immediately gave her the good news that she’d have the chance of returning to the game. Dominique now joins the previous three evictees — Cody Nickson, Jillian Parker and Cameron Heard — in competing in the Battle Back Showdown. The winner of the competition will have the shot of returning to the house, and all will be revealed on Friday, July 21. Read Dominique’s “Big Brother” 19 exit interview below.

When Dominique was exiting the game, Paul Abrahamian whispered, “Philosophy outside of the house,” into her ear. Chen asked what that meant, and Dominque explained that Paul “likes to have philosophy talks,” implying that he wanted to meet up with her in real life after the game was over.

However, Dominique wasn’t sure she’d be down to become friends with Paul. “I’m gonna be honest with you, Julie. I love God — a lot. And sometimes the human side takes over and I don’t know if I can be friends with someone who did what they did. So I’m gonna pray on it.”

“Things weren’t adding up,” she explained to Chen about why she lost trust in Paul. “We’ll see. I hope I’m not wrong, but if I’m wrong that’s one of the reasons why I apologized in advance, because I can own up to the possibility of me being wrong. But just based on his behavior the day prior and the day of, things just didn’t add up.”

As for why Dominique called out her fellow alliance member Elena Davies, she readily admitted, “I was hoping that Elena would come talk to me. Some people were afraid to talk to me after all of this happened. With Elena, she was making comments prior to noms that were red flags for me.”

Dominque ended her “Big Brother” exit interview by explaining to Chen that she would “be quiet” if she had the chance to do it all over again. And thanks to the Battle Back Showdown, that is now an option. Who do YOU think will win the chance to return to the “Big Brother” Season 19 house? Let us know by sounding off down in the comments section.