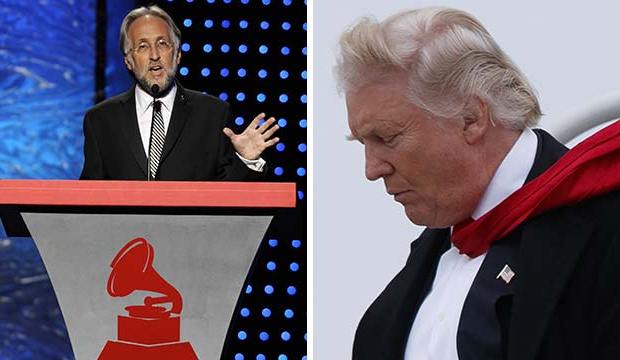 Donald Trump has proposed a budget that would eliminate all funding for public broadcasting and the National Endowment for the Arts. Suffice it to say that the arts and entertainment community isn’t happy with the proposed cuts, and they have made their feelings known.

Recording academy president and CEO Neil Portnow said in a statement, “Love of music and the arts brings us together, and celebrates the richness of American culture and our spirit of curiosity and creativity. Music and art serve as one of America’s greatest exports, and support jobs for creators in cities, towns and rural areas across the country. The White House proposal to eliminate funding for the National Endowment for the Arts is shortsighted and alarming. The modest support that we provide to music and the arts is returned many times over, whether measured in jobs and economic impact, or sheer cultural enrichment and introspection. The Recording Academy will ask Congress to maintain funding for the National Endowment for the Arts and renew our commitment to America’s creators.”

PBS president and CEO Paula Kerger added, “PBS and our nearly 350 member stations, along with our viewers, continue to remind Congress of our strong support among Republican and Democratic voters, in rural and urban areas across every region of the country. We have always had support from both parties in Congress, and will again make clear what the public receives in return for federal funding for public broadcasting. The cost of public broadcasting is small, only $1.35 per citizen per year, and the benefits are tangible: increasing school readiness for kids 2-8, support for teachers and homeschoolers, lifelong learning, public safety communications and civil discourse.”

The Corporation for Public Broadcasting president Patricia Harrison concurs: “There is no viable substitute for federal funding that ensures Americans have universal access to public media’s educational and informational programming and services. The elimination of federal funding to CPB would initially devastate and ultimately destroy public media’s role in early childhood education, public safety, connecting citizens to our history, and promoting civil discussions for Americans in rural and urban communities alike.”

What do you think of the proposed budget cuts? Comment below, and discuss this and more in our forums.