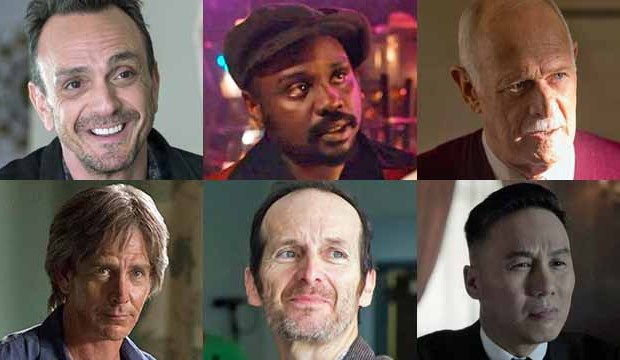 The Emmy race for Best Drama Guest Actor includes two of last year’s champions (Hank Azaria, Ben Mendelsohn), three first-time contenders (Brian Tyree Henry, Gerald McRaney, BD Wong), and one previous nominee (Denis O’Hare) looking for his first career win. We’ve got all six episode submissions for these 2017 contenders, so let’s take a look at what Emmy voters will be watching soon (descriptions below are from the nomination ballots).

HANK AZARIA as Ed Cochran on “Ray Donovan”
Azaria is a six-time Emmy winner (including this category last year) among his 13 nominations.
Episode Title: “Norman Saves the World”
Ed Cochran, a disgraced former FBI agent, is offered one million dollars by Ray to get Mickey released from prison. Ed presents the DA with evidence against TV star Sherman Radley that could influence the DA to release Mickey, but he attempts to betray Ray in the process.

BRIAN TYREE HENRY as Ricky on “This Is Us”
Henry is a first-time Emmy nominee.
Episode Title: “Memphis”
Randall and William take a road trip to Memphis, where Randall learns about William’s past.

GERALD MCRANEY as Dr. Nathan Katowski on “This Is Us”
McRaney is a first-time Emmy nominee.
Episode Title: “The Big Day”
Dr. K’s life is put on full display for all to see. His love and great loss of his late wife is almost overwhelming, until the fateful beeper goes off where he needs to go deliver Jack and Rebecca Pearson’s babies.

BEN MENDELSOHN as Danny Rayburn on “Bloodline”
Mendelsohn is a one-time Emmy winner (for this same role in supporting) among his three nominations.
Episode Title: “Part 32”
Through flashbacks, the black sheep of the family (Danny) continues to be a core component of the familial drama as his memory haunts the guilt-riddled Rayburns until the bitter end.

DENIS O’HARE as Jessie on “This Is Us”
O’Hare is a three-time Emmy nominee with no wins.
Episode Title: “Christmas”
The Pearson family finds themselves at the hospital on Christmas Eve after little Kate comes down with appendicitis. Kevin celebrates Hanukkah with Sloane and her family, Kate continues to pursue her big surgery and someone from William’s past reappears in his life.

BD WONG as Whiterose on “Mr. Robot”
Wong is a first-time Emmy nominee.
Episode Title: “eps2.3_logic-b0mb.hc”
Whiterose is the leader of the Dark Army, a Chinese-based hacking organization. Secretive, controlling, and self-protective, Whiterose is obsessed with the concept of time. As fsociety deals with the consequences of the five/nine hack, Whiterose moves forward with plans for Phase II.