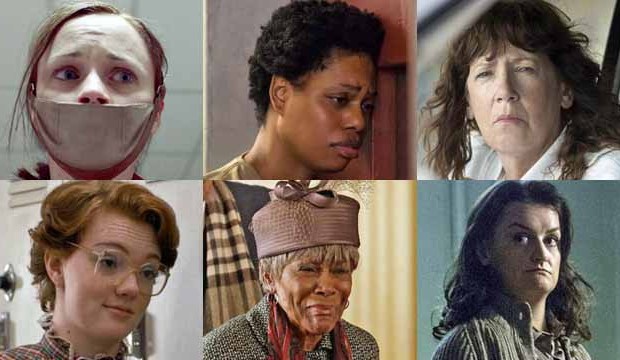 The Emmy showdown for Best Drama Guest Actress includes just one past winner (Cicely Tyson), one previous nominee (Laverne Cox), and four first-time contenders (Alexis Bledel, Ann Dowd, Shannon Purser, Alison Wright). We’ve got all six episode titles being submitted for these 2017 nominees, so let’s take a look at what Emmy voters will be watching soon (descriptions below are from the nomination ballots).

ALEXIS BLEDEL as Ofglen on “The Handmaid’s Tale”
Bledel is a first-time Emmy nominee.
Episode Title: “Late”
Offred visits Janine’s baby with Serena Joy and remembers the early days of the revolution before Gilead. Ofglen faces a difficult challenge.

LAVERNE COX as Sophia Burset on “Orange is the New Black”
Cox is a two-time Emmy nominee with no wins.
Episode Title: “Doctor Psycho”
After Caputo ignores Sophia’s requests to review the decision of her being in SHU, she stages several protests for her release – from stuffing her clothing down the toilet to clog it up to lighting her cell on fire.

ANN DOWD as Patti Levin on “The Leftovers”
Dowd is a first-time Emmy nominee (also contending for Best Drama Supporting Actress).
Episode Title: “The Most Powerful Man in the World (and His Identical Twin Brother)”
Dead and buried, but alive and well in a surreal afterlife, Patti Levin returns to torment Kevin Garvey again, this time not as a cult leader, but as Secretary of Defense of The United States.

SHANNON PURSER as Barb Holland on “Stranger Things”
Purser is a first-time Emmy nominee.
Episode Title: “Holly, Jolly”
Barb Holland is Nancy’s studious, straight-laced best friend who becomes concerned when Nancy starts spending more time with Steve. When Barb ducks outside to escape a party where she’s gotten in over her head, she’s taken to the Upside Down, sending Nancy on a journey to find her.

CICELY TYSON as Ophelia Harkness on “How to Get Away with Murder”
Tyson is a three-time Emmy winner among her 13 nominations.
Episode Title: “Go Cry Somewhere Else”
Annalise is embarrassed to see her parents at her trial, so she confronts them, only to learn that Ophelia is suffering from dementia. She thinks that Annalise is taking the blame for her for setting the house on fire that killed Annalise’s abusive uncle.

ALISON WRIGHT as Martha on “The Americans”
Wright is a first-time Emmy nominee.
Episode Title: “The Soviet Division”
Secretary to the head of FBI Counter-Intelligence, Martha married Clark, an agent with FBI internal affairs. She spied on her colleagues for him. When her cover’s blown, Clark confesses that he’s actually a KGB spy. Sent to Moscow, Martha struggles to adapt to her new life.