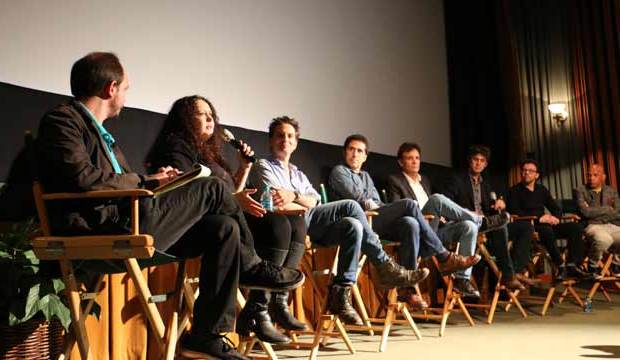 Shea, a member of Bleeding Fingers Music, studied under legendary composer Hans Zimmer. He is nominated for the first time alongside composing parter Jasha Klebe for their work on BBC America’s nature documentary series. “Stylistically we decided that we weren’t going to do a bird’s eye view of the score from season one,” he reveals. “Instead, we would get down to the specific details of every moment in the show and just enhance it with the music.” Zimmer composed the main title theme; the trio previously contended at the BAFTAs.

Best known for working on HBO’s political satire “Veep,” Willis is also a first-time contender in the Best Music and Lyrics category for his song “Jing-A-Ling-A-Ling” in the Disney channel animated series. “It’s incredibly intimidating to try and take part in the Mickey Mouse tradition because there have been so many great musicians that have done so much great work for Mickey over the years,” he divulges. Willis already has three consecutive Annie awards for his work (2014, 2015, and 2016).

Lionelli won three Sports Emmys for scoring the documentaries “Brooklyn Dodgers: The Ghosts of Flatbush” (2007), “Ted Williams” (2009), and “Kareem: A Majority of One” (2015). He competes for the first time at the Primetime Emmys for his work on Ezra Edelman‘s Academy Award-winning biographical film about the rise and fall of O.J. Simpson. “Ezra wasn’t interested in retelling the court story and everything that we had already heard,” he recalls. “He wanted to bring in race in America and the Rodney King riots. Overall I tried to focus on the big picture and on the tragedy of the whole event instead of the details everyone is so familiar with.” Lionelli contended at the Daytime Emmys for “Tom & Jerry Kids Show” in 1992 and “The Real Adventures of Johnny Quest” in 1997.

Quayle won his first Emmy last year for USA Network’s “Mr. Robot” and previously competed for “American Horror Story: Freak Show.” He is a double-nominee this year for his main title theme and score to Ryan Murphy‘s miniseries about the long-standing rivalry between Bette Davis and Joan Crawford. “Ryan just had a vision of the show that these famous women were very sad women that were treated horribly by everyone in Hollywood and he wanted people to feel that through the music,” he explains. In addition to his Emmy recognition, Quayle also reaped a Grammy bid for the Donna Summers dance recording “I Will Go With You (Con te partirò).”

Russo has received three nominations for his work on the FX anthology series about crime in the midwest. Reflecting on his creative partnership with creator Noah Hawley, he reveals, “It’s like we’re in a band. Noah has a musical vernacular because he’s a musician, so we can have specific conversations that can’t always happen with filmmakers. We almost have a secondary language together.” The two also collaborated this year on “Legion,” based on Marvel’s X-Men. Russo is also a Grammy nominee for the rock album “Head on Straight” (2003).

Best known as music director for “The Tonight Show with Jay Leno” and “American Idol,” Minor received his sixth and seventh career nominations for his work on “Stayin’ Alive: A Grammy Salute to the Music of the Bee Gees” and “Taking the Stage: African American Music and Stories That Changed America.” “The process of working on the two shows I was nominated for were very different,” he divulges. “The number one thing we would try to do was get everyone feeling good and on the same page before we just got out of the way and let the music be the boss.” Minor previously competed for “Genius: A Night for Ray Charles” in 2005, the 50th and 51st Annual Grammy Awards in 2008 and 2009, “An Evening of Stars: Tribute to Chaka Khan” in 2011, and “Smithsonian Salutes Ray Charles” in 2016.

Kowal, who wrote the main title theme for “Homicide: Life on the Street,” has served at Music Consultant to the Primetime Emmy Awards since 2000. She is tasked with reviewing the more than 770 submissions the music department receives in a given year. “The great thing about the Emmy process is that it’s always changing and moving,” she explains. “I’m very proud of our peer group because we work very hard to sort through the submissions and help the good material rise to the top.” Kowal is also a board member of the SCL.

'Rebecca' through the years: From radio play to Oscar winner and Emmy champ

'News of the World' trailer: Tom Hanks and director Paul Greengrass reunite for first time since…