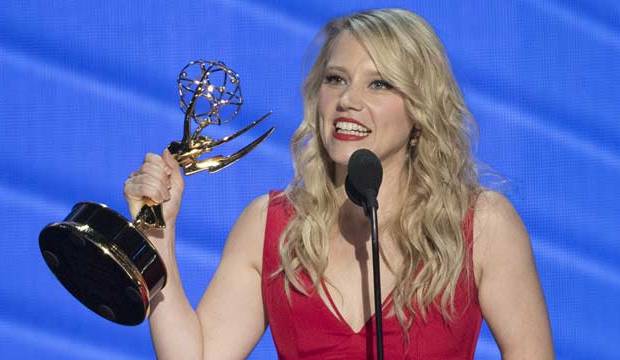 Kate McKinnon surprised Emmy pundits last year by winning Best Comedy Supporting Actress for “Saturday Night Live.” She was the first regular cast member on “SNL” to win an Emmy since variety performers were moved into the comedy acting categories in 2008. But she won’t surprise us again this year. Now our experts are overwhelmingly predicting her to repeat.

McKinnon plays myriad characters on “SNL,” and Emmy voters love to reward actors for playing multiple roles — they can vote for several performances for the price of one — but there’s one role in particular that will likely give McKinnon a boost this year. She played Democratic presidential candidate Hillary Clinton throughout the election campaign, through her debates against Donald Trump and her upset loss in November. McKinnon even performed Leonard Cohen‘s “Hallelujah” in character as a dual tribute to Clinton and to Cohen, who had just died. Those political sketches made McKinnon so popular she even won a Critics’ Choice Award as a leading actress.

Two of our experts are going in another direction. Kerr Lordygan (Rotten Tomatoes) expects Zazie Beetz (“Atlanta”) to prevail. Only a few of our experts are forecasting a nomination for breakthrough star Beetz, but if “Atlanta” is as strong a contender for Best Comedy Series as we think it is we shouldn’t underestimate its cast.

And Tom O’Neil (Gold Derby) is currently forecasting a win for Andrea Martin (“Great News”). The series just premiered on NBC on April 25, so it’ll be fresh in voters minds. Plus it’s produced by “30 Rock” Emmy darling Tina Fey, which never hurts. And Martin is an industry favorite in and of herself. She earned 10 total nominations for “SCTV” over just two years (1982-1983), winning twice for writing. This would be her first victory for acting.

None of the experts are predicting a win for any other Comedy Supporting Actress contenders — at least, not yet. But 14 out of 15 are predicting return nominations for Anna Chlumsky (“Veep”) and Judith Light (“Transparent”). Chlumsky has been nominated for the last four years in a row, while Light first earned a nomination for this role last year. Both are looking for their first Primetime Emmy wins, though Light does have two past victories at the Daytime Emmys for “One Life to Live.”

Eleven experts predict legendary EGOT winner Rita Moreno will earn a nomination for the first season of Netflix’s reimagining of the classic sitcom “One Day at a Time.” Moreno has been nominated for six Primetime Emmys and four Daytime Emmys. She previously won in primetime for her guest appearance on “The Muppet Show” (1977) and then the following year for a guest role on “The Rockford Files” (1978). But it’s been 20 years since her last Emmy bid.

Jane Krakowski didn’t make the cut last year for her performance in “Unbreakable Kimmy Schmidt,” but she was nominated the year before for the Netflix series, and she picked up another four nominations for her prior role in “30 Rock.” Now seven experts are predicting that she’ll return to the lineup.

Another past nominee hoping for a comeback is Mayim Bialik (“The Big Bang Theory”). She was nominated four years in a row (2012-2015), but missed out last year. Six experts say she’ll get back in. Meanwhile, Judith Light’s “Transparent” co-star Gaby Hoffmann has been nominated for both of the Amazon show’s previous seasons, but only four experts expect her to stay in the category for a third year.

Two experts predict a nomination for a newcomer: Yvonne Orji for playing Issa Rae‘s best friend in “Insecure.” That show was a critical sensation when it premiered last fall, and Rae earned a Golden Globe nomination for Best TV Comedy Actress. Now Orji is hoping to get in on the action too.

Time's almost up to vote for the Gold Derby TV Decade Awards: Halloween is your last day

'The Masked Singer' spoilers: Who is the Flower?

'Fleabag' dominated the comedy Emmys, but didn't stop 'The Marvelous Mrs. Maisel' from making history of…