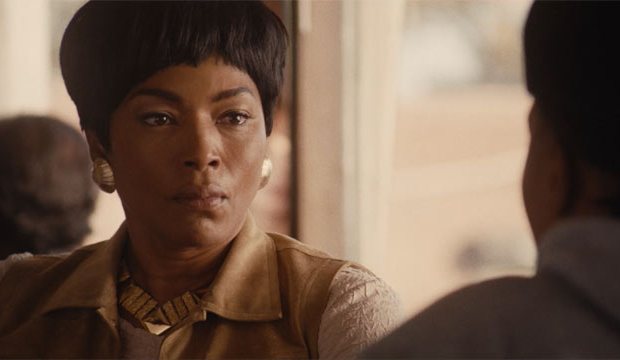 Angela Bassett has received her fourth career Emmy nomination for her guest performance on “Master of None.” The actress, who previously competed as Best Movie/Mini Actress for “The Rosa Parks Story” in 2002 and as Best Movie/Mini Supporting Actress for “American Horror Story” in 2014 and 2015, made a strong impression as the mother of Dev’s (Aziz Ansari) best friend Denise (Lena Waithe) in the episode “Thanksgiving.”

This installment centers on Denise settling into her sexuality over the course of her life, which is shown through a series of Thanksgivings from her childhood into adulthood. She faces challenges coming out as gay to her mother (Bassett), who at first refuses to acknowledge it, but eventually grows to accept her.

Based on Waithe’s personal experiences, the episode is also nominated for Best Comedy Writing (Ansari and Waithe). Could it win Bassett her first Emmy? Let’s take a look at the pros and cons.

Bassett, a Best Actress Oscar nominee for “What’s Love Got to Do With It?” (1993), is a veteran with years of industry goodwill on her side. Surprisingly, she has never won an Emmy before, and that could work in her favor if voters feel she is overdue.

The actress brings new dimensions to a familiar character: the disapproving parent of an LGBTQ child. Her work is also more subtle than most of her competition, which includes Melissa McCarthy (“Saturday Night Live”), Wanda Sykes (“Black-ish”), Kristen Wiig (“SNL”), Becky Ann Baker (“Girls”), and Carrie Fisher (“Catastrophe”). That makes her the apple in the bag of oranges; standing out from the competition in that way could help her.

“Thanksgiving” is one of the most popular episodes this season, as evidenced by that writing nomination. That could only benefit Bassett.

As great as the performance is, the role wasn’t exactly written to get big laughs. We’ve seen in the past that voters often take the “comedy” label very seriously when voting for this category, ignoring impactful performances that border on dramatic (think Melora Hardin in “Transparent” last year). Bassett’s realistic work could lose out to something more broadly comedic.

Can “Master of None” win an acting prize? Last year, it’s only victory was for Best Comedy Writing (Ansari and Alan Yang for the episode “Parents”), losing Best Comedy Actor (Ansari), Best Comedy Directing (Ansari), and Best Comedy Series. Is it doomed to repeat that? We have yet to see the TV academy’s actors branch wholeheartedly embrace the show.