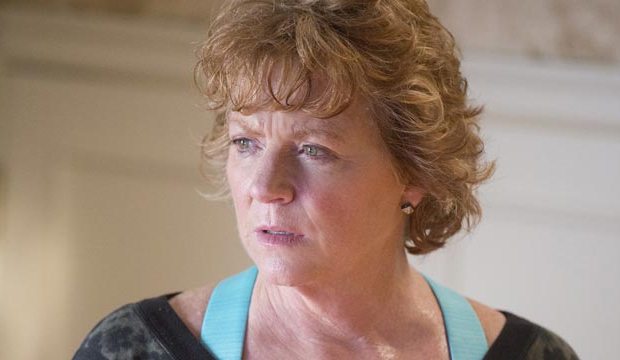 After portraying Loreen Horvath for six seasons on the groundbreaking HBO comedy “Girls,” Becky Ann Baker is celebrating her first Emmy nomination for Best Comedy Guest Actress. The veteran actress, whose career spans over three decades, plays the long-suffering mother of the series’s principal character, Hannah Horvath (Lena Dunham). Despite her storied career on both stage and screen, Baker has gone largely unrecognized from major award groups until now. After finally being acknowledged for her brilliant work, can the veteran actress pull off a surprise victory? Let’s take a closer look at her episode submission.

In “Gummies,” Hannah confides in Loreen that she is pregnant with her first child and will probably never see the father again. Loreen is having a difficult time accepting the next phase in her life and has begun taking medical marijuana to cope with anxiety. After ingesting too many cannabis gummy worms, Loreen becomes lost in Brooklyn, leading Hannah and her best friend Elijah (Andrew Rannells) on a wild goose chase to find the grandmother-to-be binge eating in a local restaurant and barely capable of standing.

Clocking in over seven minutes of screen time in four scenes, Baker’s character is visible throughout the episode and has an arching storyline. Not only is she a sympathetic figure who expresses a heartfelt fear of death, but her comedic timing is brilliant. In her final scene she ends a dramatic monologue by vomiting on herself. Baker’s range of emotions and the fact that she is actually laugh-out-loud funny should win over Emmy voters.

Baker is the scene-stealer each time she appears on screen with either Dunham or Rannells. Overshadowing the stars of the series and providing comedic relief during dramatic moments allows her to stand out.

After six seasons, “Girls” is still on the radar of Emmy voters. Just last year Peter Scolari won for playing Tad Horvath, the ex-husband of Loreen. Scolari was a surprise winner, proving “Girls” still has some clout at the Emmys. In fact, while Scolari was the sole nomination for “Girls” last year, the series received three nominations this year, all in the guest acting categories. Riz Ahmed (“All I Ever Wanted”) and Matthew Rhys (“American Bitch”) both contend for Best Comedy Guest Actor. Baker could reap the benefit of Emmy voters wanting to give this groundbreaking comedy one last hug.

The Comedy Guest Actress category is highly competitive this year and Baker is arguably the lowest-profile actress in the field. Melissa McCarthy’s highly publicized turn as Sean Spicer in “Saturday Night Live” and the potential sentimental support for the late Carrie Fisher in “Catastrophe” might be especially tough to overtake.

Baker has been a part of “Girls” since season one, but this is her first nomination. It could be argued she has given even better performances throughout previous seasons, so in this case, the nomination may be the reward for her memorable run as the complicated, unpredictable Loreen Horvath.