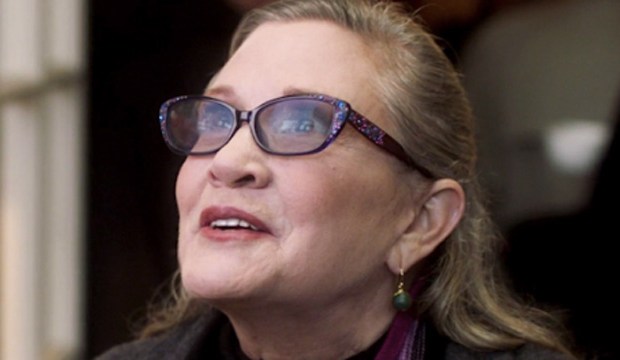 In “Catastrophe,” Fisher plays Mia, the overbearing mother of leading man Rob (Rob Delaney). She’s a loudmouth American who travels to Ireland to attend the funeral of the father of her daughter-in-law Sharon (Sharon Horgan). In “Episode 6,” the final episode of the show’s third season submitted to Emmy voters for consideration, she is as sassy and inappropriate as ever as she attempts to comfort grieving widow Carol (Frances Tomelty), her son and her daughter-in-law, in her own particularly acerbic yet loving way.

Will sentiment propel Fisher to a bittersweet triumph in this category? Let’s dive into the pros and cons of Fisher’s submission:

Fisher leaves a legacy of over 40 years in the industry as one of the most beloved actresses of her generation.  Emmy voters often gravitate towards veteran stars in the guest categories. In the last 10 years in this category alone we have seen the likes of Elaine Stritch (“30 Rock”), Betty White (“Saturday Night Live”), Kathy Bates (“Two and a Half Men”) and Joan Cusack (“Shameless”) prevail. It would not be a stretch for Emmy voters to go for Fisher, who is arguably the most famous veteran actress in the category.

If episode submissions still mean anything (voting changed in the last two years and potentially minimized the impact of sample episodes), then voters watching them will marvel at Fisher’s unmistakable comic timing. Fisher has an uncanny knack for perfectly delivering the sarcastic, sassy one-liners gifted to her by writer/stars Delaney and Horgan. Funny is often important in this category, as Emmy voters seem to appreciate the more overtly comedic performers over nominees in dramedies.

The safe bet in this category would seem to be Melissa McCarthy for her uproarious performance as former White House press secretary Sean Spicer, among a bevy of other zany characters she portrays as host of “Saturday Night Live.” But vote splitting with fellow “SNL” nominee Kristen Wiig could siphon votes away from McCarthy, opening up the category for Fisher, who stands out as a larger-than-life star in her last ever TV role.

As we reported last week, the TV academy is rarely sentimental when it comes time to handing out Emmys. Past posthumous nominees like Kathryn Joosten in 2012 (Best Comedy Supporting Actress for “Desperate Housewives”), John Ritter in 2004 (Best Comedy Actor for “8 Simple Rules”), and Phil Hartman in 1998 (Best Comedy Supporting Actor for “NewsRadio”) weren’t able to overcome other contenders with stronger episode submissions, a testament to how important episodes were in winning Emmys. Although Fisher might benefit from the newly implemented online voting system now in place, which might make her the first posthumous winner since Raul Julia (Best Movie/Mini Actor for “The Burning Season”) in 1995, history tells us that we shouldn’t be counting on sentiment alone to get her over the line.

Apart from a single nomination last year for writing, “Catastrophe” hasn’t exactly taken the Emmys by storm. Voters either don’t watch the show regularly or maybe they don’t get it. This could hurt Fisher because she doesn’t have the luxury of banking on TV academy support for her show, like some of the other contenders in this category can, like McCarthy and Wiig, Angela Bassett (“Master of None”) and Wanda Sykes (“Black-ish”).