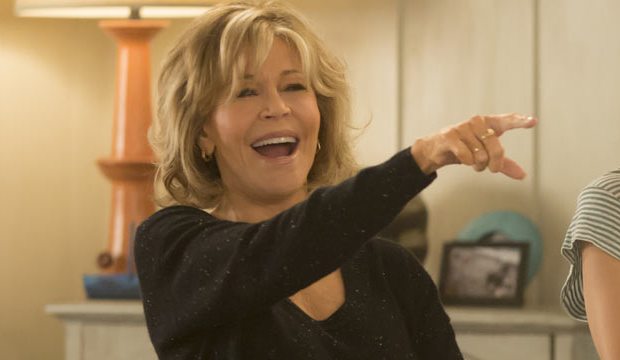 For three seasons Jane Fonda has played the reserved Grace Hanson on the Netflix comedy series “Grace and Frankie” opposite Lily Tomlin. While she missed out on Emmy nominations for the first two seasons of the series, the third time proved to be the charm for Fonda as this year she received a nomination in the Best Comedy Actress category.

Fonda earned her first Emmy nomination and only win in 1984 for her performance in the TV movie “The Dollmaker” and has since received four additional nominations. The two-time Oscar winner (“Klute,” “Coming Home”) also boasts four Golden Globes victories as well as two Screen Actors Guild and two Tony Award nominations.

Could Fonda finally win a bookend trophy this year more than 30 years after her first Emmy win? Let’s dive into the pros and cons of Fonda’s submission.

Fonda chose an episode full of traditionally Emmy-friendly material as “The Pot” finds her character drinking stiff martinis, smoking pot, and revealing unspoken feelings to her family and friends. At the beginning of the half-hour, Grace’s kids walk in on her passive-aggressively pounding chicken breasts with a meat mallet to excise her anger toward Frankie, but once she begins to mellow out with a cocktail and Frankie’s weed, she starts to bond with her daughters and open up emotionally. After another tense confrontation with Frankie, Grace finally wins her over by explaining why she owns a gun and revealing that she no longer needs it because she feels safe living with Frankie. Fonda shines in this closing scene, one of the most emotional of the series to date, as she cries first from sadness and then from the joy of reconciling with her best friend.

First time viewers of “Grace and Frankie” who find themselves drawn to the series and Fonda’s performance will get to see more of her courtesy of Lily Tomlin’s episode submission. In comparison to the rest of the nominees in the Best Comedy Actress category, both Fonda and Tomlin will have approximately double the amount of screen time across the two submissions, which could benefit them both.

As a first-time nominee in the Best Comedy Actress category, Emmy voters may jump at the opportunity to cast their ballots for someone new after awarding Julia Louis-Dreyfus (“Veep”) five consecutive trophies, especially for an actress as beloved in the entertainment industry as Fonda.

While Fonda gets a lot of substantial material in “The Pot,” the episode doesn’t center on her character, with numerous scenes dedicated to Frankie and her children (played by Baron Vaughn and Ethan Embry) and several more focusing on Martin Sheen and Sam Waterston’s characters. And even though Fonda gets to break out of Grace’s conservative shell in “The Pot,” she still comes across as the comedic straight-man opposite Tomlin’s hysterical, scene-stealing Frankie.

Fonda could fall prey to vote-splitting, with fans of “Grace and Frankie” potentially dividing their support between her and Tomlin. None of the other contenders in the Best Comedy Actress category compete against a co-star, which could put both Fonda and Tomlin at a disadvantage, especially against Emmy darlings Louis-Dreyfus and Allison Janney (“Mom”), this year’s Golden Globe winner Tracee Ellis Ross (“Black-ish”), and fan favorites Pamela Adlon (“Better Things”) and Ellie Kemper (“Unbreakable Kimmy Schmidt”).