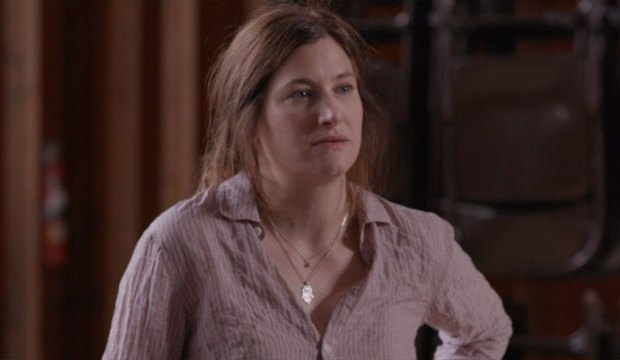 Kathryn Hahn scored a Best Comedy Supporting Actress Emmy bid for her sympathetic performance as Rabbi Raquel Fein in Amazon’s “Transparent.” Despite working in the industry for years with deserving roles in shows like “Happyish” and “Parks and Recreation,” this is her first Emmy nomination. She finds herself in competition with a co-star (Judith Light), three “Saturday Night Live” actresses (Vanessa Bayer, Leslie Jones, and Kate McKinnon), and Anna Chlumsky (“Veep”). Hahn is counting on the episode “Life Sucks and Then You Die” to take home the gold.

In the episode Raquel and Sarah (Amy Landecker) prepare invitations for their seder, but Sarah is only interested in pressing Raquel to sleep with the synagogue’s new cantor Duvid (Kobi Libii). Later that night the would-be lovers talk alone and Raquel sees a vision of Sarah who pressures the rabbi to make a move. Raquel gives in to the imaginary devil’s wishes and starts kissing Duvid. But the devout man keeps asking permission for every action (“May I touch your nipple?”). When he attempts to create a love poem about her areola, Raquel implores him to stop talking and throws herself on him.

While setting up for the event the following day, Sarah blabbers about how this “Jew-y stuff” has made her feel more connected with her ex-husband and she is having a spiritual awakening. “That’s not spirituality!” Raquel bellows, before launching into an epic tirade berating Sarah’s casual approach to faith. When Duvid attempts to intervene, she lays into him with a profanity-laced meltdown. Raquel repeats over and over that she is not doing the seder as she falls to the floor in tears.

Though she is not the lead in the series, Hahn gets one of the main storylines of this episode. Her three big scenes appear at the beginning, middle, and end to ensure a competitive amount of screen-time.

Raquel’s brilliantly performed outburst is the emotional high point of the episode. And even though the scene skews dramatic, the versatile Hahn still imbues the moment with a comedic sensibility (especially when swearing at her religious lover or chastising Sarah for not knowing the name of the messiah).

Thanks to her other Amazon series “I Love Dick” and her big screen hit “Bad Moms,” Hahn has enjoyed an increased amount of exposure over the last year. Her portrayal of Rabbi Raquel on “Transparent” is vastly different from her other characters, demonstrating an immense range as an actor.

Hahn is nominated in the same category as her “Transparent” co-star Judith Light. She risks splitting the vote with this beloved industry veteran. Also, neither actress appears in each other’s submission, so they won’t give each other a boost either.

Not everyone thinks of “Transparent” as a true comedy. If voters insist on rewarding a 100% comedic performance, it may be hard for Hahn to secure votes over the likes of reigning champ Kate McKinnon (“SNL”).