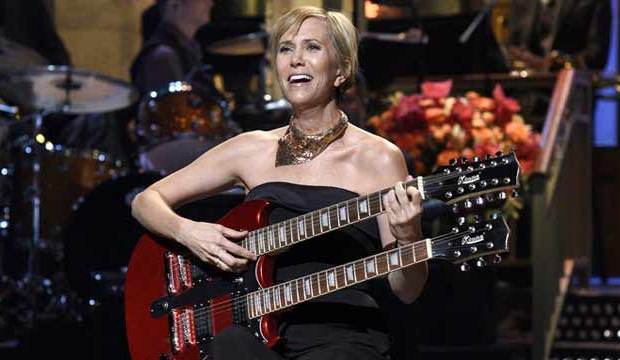 Kristen Wiig racked up her eighth Emmy nomination this year, this time for hosting NBC’s “Saturday Night Live.” Will the fan-favorite actress finally win her first Emmy or is she doomed to be a “bridesmaid” again?

Wiig is nominated in Best Comedy Guest Actress for hosting the seventh episode of “SNL’s” 42nd season. She was previously nominated for hosting “SNL” in 2013, and was nominated four years in a row from 2009-2012 in Best Comedy Supporting Actress as a regular cast member. Her other two nominations were for Best Voice-Over Performance for “The Looney Tunes Show” in 2012 and Best Movie/Mini Actress for “The Spoils of Babylon” in 2014.

In her hosted episode, Wiig brings back a few of her greatest hits, like Mindy Grayson on “Secret Word” and the Surprise Party’s Aunt Sue, but she also gets to branch out with new characters. She sings about Thanksgiving in her opening monologue, she spoofs CNN’s Dana Bash, she plays a giant “Madeline” balloon, and she shows off her acting skills with deeper characters in a QVC sketch with Cecily Strong and a Whiskers R We ad with Kate McKinnon.

Can Wiig overcome her losing streak and finally take home an Emmy this year? Let’s examine her submission.

Wiig is a modern “SNL” legend, and with this being her sixth nomination for the show, it’s safe to assume that Emmy voters love what she brings to it. Fans who miss her will undoubtedly love the return of her characters Mindy Grayson and Aunt Sue, while her other sketches are very much in keeping with her broad, goofy comedic style. The sketches where she’s bouncing off others (QVC, Whiskers R We, Surprise Party) are her strongest, with Wiig’s high-energy mania making many of her scene partners come close to breaking character.

Voters may not realize that Wiig still has yet to win an Emmy, but if they do, she could certainly benefit from being perceived as overdue. Her career continues to grow in both film and television, likely crossing paths with many members of the TV academy, and that will only help her in the final vote tally. The academy also loves giving Emmys to “SNL” hosts in the guest categories, and Wiig is the kind of naturally funny, charismatic comedian that wins — past examples include Tina Fey, Amy Poehler, and Betty White.

While Wiig’s episode is a good showcase of her talent, it does not go the extra mile beyond what we have seen from her on “SNL” in years past. Voters clearly enjoy her contributions on the show, but they have always gone in a different direction when it comes to picking a winner. Plus, her episode was not one of the more talked-about of the season, considering she was not directly involved in any famous political sketches.

The biggest disadvantage for Wiig is the presence of her “Ghostbusters” co-star Melissa McCarthy. McCarthy’s performance as White House Press Secretary Sean Spicer was one of the defining elements of this entire TV season, let alone “SNL.” If Wiig were the only “SNL” host nominated in this category she would have had an easier path to victory, but McCarthy may overshadow her. Still, if some voters weren’t as impressed by the hype around McCarthy’s performance, they may look to Wiig as a viable alternative.