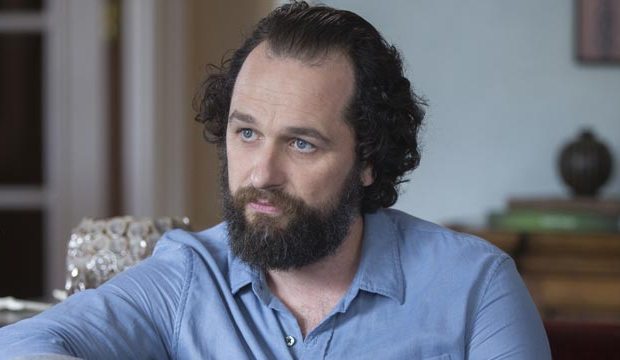 After receiving his first Emmy nomination last year for “The Americans,” Matthew Rhys received twice as much love from the television academy in 2017, repeating his nomination for the FX drama and earning another for Best Comedy Guest Actor in HBO’s “Girls.” Not known as a comedic actor, Rhys proved he could ham it up while portraying a controversial, eccentric author. Will comedy now prove to be his best shot at finally taking home a golden statue? Let’s take a closer look at his episode submission.

In the episode “American Bitch,” Hannah Horvath (Lena Dunham) has a tense one-on-one conversation with acclaimed author Chuck Palmer (Rhys), a writer she once admired but then criticized after allegations of sexual misconduct surrounded him. The two banter inside of his home until Hannah is able to confirm the worst about a man she once looked up to.

With almost 24 minutes of screen time, Rhys appears in nearly the entire episode, essentially making him the lead actor. Shot entirely in one setting, the characters played by Rhys and Dunham banter back and forth about whether he is taking advantage of young girls or just living the dream of a famous author. This narcissistic, predator-like character is a departure from his role in “The Americans,” which is what the television academy is most familiar with. His brave performance in “Girls” showed he had range and could win over Emmy voters.

Rhys is able to give depth to an unlikable character and gives viewers something to ponder. His sarcastic wit throughout the episode is delivered brilliantly as Chuck slowly grooms Hannah from being an aggressive critic to yet another victim of his charm. He delivers a believable performance that shows the control powerful men are able to exert over their admirers.

Over six seasons, “Girls” has received an impressive 18 Emmy nominations. Just last year, Peter Scolari won in this category for his turn as Tad Horvath, Hannah’s conflicted father. Scolari’s win was proof that “Girls” still has some clout with Emmy voters. Rhys is one of three actors to be nominated for “Girls” this season, which is more than ever before. Riz Ahmed (“All I Ever Wanted”) is competing in the same category and Becky Ann Baker (“Gummies”) is up for Outstanding Guest Actress in a Comedy Series. Of the three, Rhys has the most substantial role, and that could make him stand out.

Although Rhys delivers a meaty performance for a comedy’s standards, the creep factor could hurt his chances. This performance is sprinkled with humor, but his character gives the audience an icky feeling throughout. He brags about how he is able to take advantage of young women and then essentially sexually assaults the primary character, Hannah, near the end. It is difficult to walk away from this episode feeling as one would expect to after watching an Emmy-worthy comedic performance.

As noted above, Ahmed is also nominated for a role in the same series. Unlike Rhys, Ahmed plays a likable, aloof character that is more traditional for a comedy series. Should Emmy voters be torn between the two, it may be easier to vote for the more sympathetic Ahmed, who is also a double-nominee this year (he’s also up for Best Movie/Mini Actor for “The Night Of”).

Aside from Ahmed, Rhys is facing competition from three actors from the red-hot “Saturday Night Live” in Dave Chappelle, Tom Hanks and Lin-Manuel Miranda. His other competitor is Hugh Laurie from “Veep,” which has proven to be an Emmy powerhouse in recent years. Playing such a dark role could put Rhys at a disadvantage among this group of funnymen.