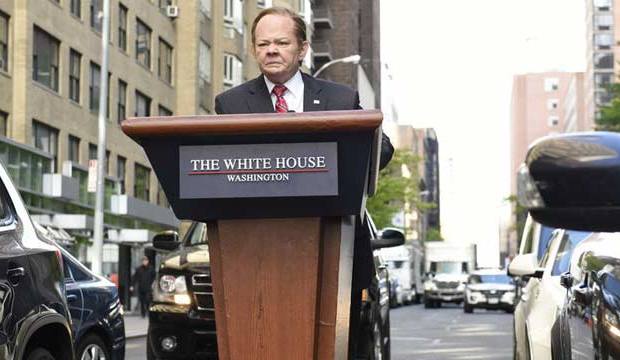 Few performances struck a cord in the national discourse quite the same way Melissa McCarthy‘s frequent guest spots on “Saturday Night Live” did this season. Her appearances as now-former White House press secretary Sean Spicer were water-cooler moments, and the actress has been rewarded with an Emmy nomination as Best Comedy Guest Actress for the episode she personally hosted. It’s the eighth career bid for McCarthy, who won as Best Comedy Actress for “Mike and Molly” in 2011 and competed twice more for that series (2012 and 2014) and four more times for “SNL” (2012, 2013, 2014, and 2016).

McCarthy’s episode opens with a parody of Donald Trump‘s (Alec Baldwin) interview with Lester Holt about why he fired FBI Director James Comey. Other sketches include Melissa picking a mother from the audience and taking her on a studio tour; Melissa as Spicer searching New York for Trump; and Melissa getting hit in the face with a pie while on a game show.

Interestingly enough, Baldwin also submitted this episode for consideration as Best Comedy Supporting Actor instead of the episode he himself hosted. Can McCarthy win her second Emmy with it? Let’s take a look at the pros and cons.

McCarthy’s frequent appearances on “SNL” as Spicer were widely viewed and talked about; with a few more stints, she could have very well competed in Comedy Supporting Actress (as was the case with Baldwin, who appeared in too many episodes to be considered a guest). Week after week, McCarthy captured the absurdity of Spicer’s bombastic, confrontational press briefings, and she was very funny while doing it.

“SNL” has done well in this category. Tina Fey, Betty White, and Amy Poehler have all taken home prizes for hosting.

McCarthy, an Oscar nominee for “Bridesmaids” (Best Supporting Actress in 2011), is very well liked within the TV academy, as evidenced by her previous win and multiple nominations.

Spicer recently resigned as White House press secretary, likely killing our hopes of any future appearances on “SNL” (Sean, please make a cameo with McCarthy next season; we’ll forgive you for everything). Will McCarthy’s performance feel less relevant with her muse gone?

McCarthy competes in this category against another “SNL” host (and former regular cast member), Kristen Wiig. If they split the vote, it could swing the prize to Becky Ann Baker (“Girls”), Angela Bassett (“Master of None”), Carrie Fisher (“Catastrophe”), or Wanda Sykes (“Black-ish”).