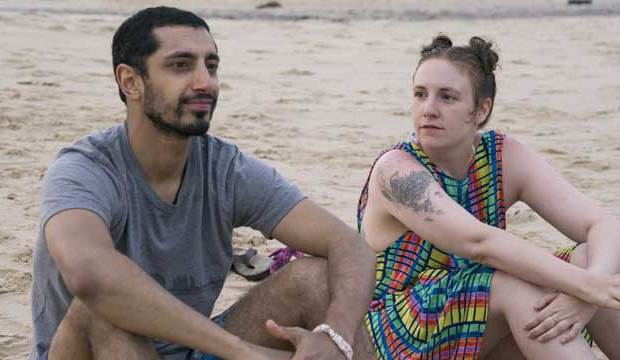 Riz Ahmed is having a really good year, having been recognized with not one, but two Emmy nominations: Best Movie/Mini Actor for his leading role in “The Night Of,” and Best Comedy Guest Actor for his role in “Girls.” For “Girls” Ahmed has submitted the premiere episode of the show’s sixth and final season for consideration, titled “All I Ever Wanted,” in which he plays carefree surf instructor Paul-Louis.

In “All I Ever Wanted” Hannah (Lena Dunham) is sent to Montauk, Long Island, on a writing assignment about middle-aged women taking surf lessons. There she encounters Paul-Louis, a cool and magnetic instructor who catches her eye. They run into each other at a bar and hit it off, and they end up spending the night together. The morning after, Paul-Louis shows Hannah around Montauk, and she is won over by his positive outlook and attitude. Later, lying in bed together, Paul-Louis casually makes reference to having a girlfriend, which puts Hannah off. Realizing that he might have hurt her feelings, he apologizes to Hannah, and they part ways.

Can Ahmed win over Emmy voters just like his affable character does with Hannah? Let’s dive deeper into his Emmy submission to consider the pros and cons.

Although “Girls” doesn’t perform at the Emmys like it used to, it has been a solid presence in the guest acting categories of late, with three noms this year alone, and winning the Best Comedy Guest Actor race for surprise substitute nominee Peter Scolari (who replaced Peter MacNicol for “Veep” after he was ruled ineligible). Voters are obviously paying attention to the guest and recurring actors on this show, which is good news for Ahmed.

Emmy voters have so much love for Ahmed that he has two noms this year. Multiple acting nominees often do really well at the Emmys, like Sarah Paulson (nominated for “American Horror Story: Hotel,” won for “The People v. O.J. Simpson,” 2016), Jon Hamm (nominated for “Unbreakable Kimmy Schmidt,” won for “Mad Men,” 2015), Kathy Bates (nominated for “Harry’s Law,” won for “Two and a Half Men,” 2012), Neil Patrick Harris (nominated for “How I Met Your Mother,” won for “Glee,” 2010), and Tina Fey (nominated for “30 Rock,” won for “Saturday Night Live,” 2009). Multiple nominees don’t always win (sorry Laurie Metcalf, who went zero for three last year), but receiving more than one nomination absolutely demonstrates that Emmy voters are paying attention to particular performers who are having particularly good years across the board.

If episode submissions mean anything anymore (voting changed in the last two years and potentially minimized the impact of sample episodes), then voters watching “All I Ever Wanted” will take to Paul-Louis almost instantly. Ahmed portrays him with a genuinely charming and likeable vibe, easing us into a relatively whimsical episode of “Girls” that is at times quite funny and heartwarming. In a category stacked with over-the-top and larger-than-life performances, Ahmed’s more subtle, easygoing tone might be welcome respite for some voters.

This category might be the most susceptible to the dreaded vote-splitting factor. With three contenders from “Saturday Night Live” (Dave Chapelle, Tom Hanks and Lin-Manuel Miranda) and two from “Girls” (fellow double-nominee Matthew Rhys joins Ahmed as the representatives from this show), voters enamored with either series are likely going to spread their votes amongst these contenders. The likely beneficiary would be Hugh Laurie, given that he is the sole nominee from “Veep.”

Although “Girls” is a solid presence in the guest acting categories, the show has lost some of its luster with Emmy voters over the years. It has gone from being nominated for Best Comedy Series for its first two seasons to earning only a couple of bids for its third and fourth seasons, a single nod for its fifth season, and now three guest noms for this final season. It is arguable then that Ahmed, like his “Girls” stablemate Rhys, doesn’t have the luxury of banking on widespread TV academy support for his show, which the guys from “Saturday Night Live” (Chapelle, Hanks and Miranda) and especially perennial Emmy bridesmaid Laurie for “Veep” will have.