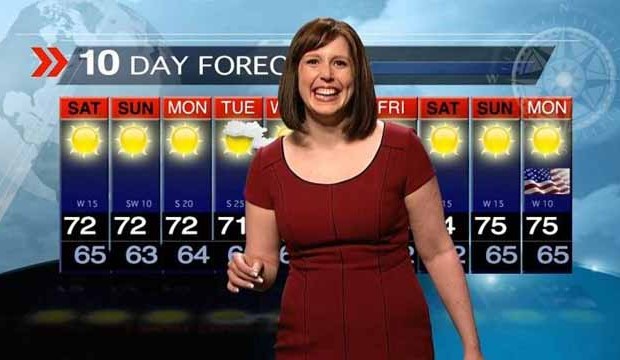 Vanessa Bayer departed from “Saturday Night Live” after seven seasons, but reaped an Emmy bid as Best Comedy Supporting Actress. It was a career first nomination for the comedienne, one of 22 received for the sketch comedy series overall. She has submitted the season finale, hosted by Dwayne Johnson, to Emmy voters for consideration.

In this installment, Bayer reprises her nervous weather girl Dawn Lazarus and plays an anxiety-ridden woman with a fidget spinner, a glamorous 1940s movie star with serious flatulence problems, a woman on a “Jurassic Park” amusement ride, and a graduating high school senior.

Can Bayer win for this episode? Let’s take a look at the pros and cons:

Kate McKinnon‘s historic win in this category last year for “SNL” paved the way for similar victories for other actors in sketch comedy shows. If McKinnon was the first, Bayer can be the second.

Voters who nominated Bayer knew this would be their last chance to vote for her for “SNL.” There may be enough academy members who want to give her a little golden going-away-present.

It’s been a banner season for “SNL.” Its 22 nominations tied it with “Westworld” as the most recognized show of the year. Can Bayer get caught up in a sweep?

Bayer competes against co-stars McKinnon and Leslie Jones, which could lead to some serious vote-splitting. Will they cancel each other out and swing the win to Anna Chlumsky (“Veep”), Kathryn Hahn (“Transparent”), or Judith Light (“Transparent”)?

When it comes to handing out farewell gifts, the Emmys aren’t exactly sentimental. For every Jon Hamm who wins for the final season of “Mad Men,” there’s a Steve Carell (“The Office”) or Amy Poehler (“Parks and Recreation”) who goes home empty-handed. Poehler, of course, finally won for co-hosting “SNL” with Tina Fey, so even if Bayer doesn’t take home a trophy on her first try, there’s always the second, third, or 18th.