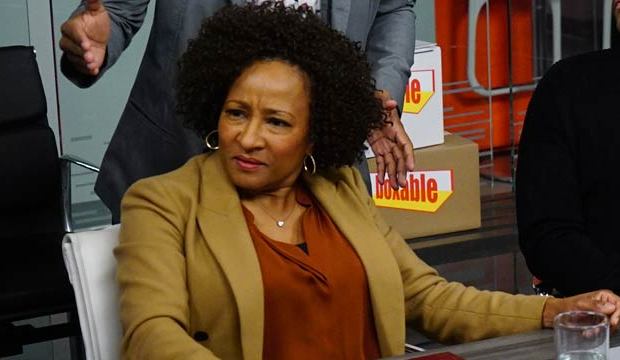 Wanda Sykes received her eighth career Emmy nomination this year, for her recurring role on ABC’s “Black-ish.” Oddly enough, it’s the comedienne’s first bid for acting. She won for writing “The Chris Rock Show” in 1999 and also competed for Variety Writing for that series in 1998, 2000, and 2001. Additionally, she was up for Variety Special for “Wanda Sykes: Sick and Tired” in 2007 and Variety Special and Variety Special Writing for “Wanda Sykes: I’ma Be Me” in 2010. This year Sykes is recognized as Best Comedy Guest Actress for playing Dre’s (Anthony Anderson) boss in the episode “Lemons.”

The country is still reeling from the election of Donald Trump, and tensions are high at Dre’s office, where no work has gotten done on a major project. He lashes out at his co-workers, who criticize him for not being upset enough, with a speech about how the country has continuously disappointed African Americans. Later, when tempers have cooled, they discuss ways to move forward.

Anderson has also submitted this episode for consideration as Best Comedy Actor. Can Sykes win with it too? Let’s dive into the pros and cons.

“Lemons” is a timely and acclaimed episode. Anti-Trump sentiment in the country could result in protest votes at the Emmys in multiple categories.

Sykes in incredibly well liked within the industry and the TV academy, as witnessed by her multiple nominations and win. Plus, she’s likely to give a lively and relevant acceptance speech.

While “Black-ish” has struggled to catch on with Emmy voters across the board, one branch it continues to resonate with is the actors, who also nominated Tracee Ellis Ross for Best Comedy Actress.

Is Sykes overshadowed by Anderson? While she brings much-needed comic relief to the tense workplace scenes, the episode revolves around Dre, climaxing in his big speech. Voters may overlook her performance.

Acclaimed as it was, “Lemons” failed to receive a writing nomination for creator Kenya Barris. Does that indicate soft support from the TV academy as a whole?