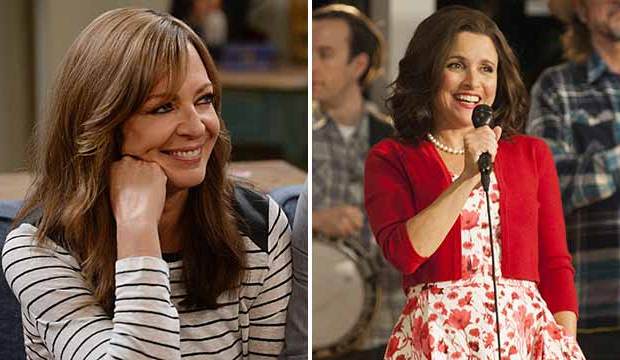 The 2017 Emmy nominations were announced on Thursday morning, July 13, and Julia Louis-Dreyfus is nominated for Best Comedy Actress for the sixth year in a row for her role as Selina Meyer in “Veep.” She’s actually never lost for this role, but now that Allison Janney is nominated in this category for the first time for “Mom,” could she be the one who finally dethrones the champion? Check out the complete list of nominees here.

Louis-Dreyfus holds the record for the most consecutive Comedy Actress victories with five in a row for “Veep,” and she also holds the record for the most victories of all time in the category with six (she previously won for “The New Adventures of Old Christine” in 2006). Throw in her Comedy Supporting Actress win for “Seinfeld” in 1996, and that brings her career total to seven acting Emmys, one shy of Cloris Leachman‘s Primetime Emmy record (and Leachman also has a performing award from the Daytime Emmys, bringing her overall total to nine).

But Janney has also won seven Emmys, so we know the TV academy admires her just as much as they do Louis-Dreyfus. And this is her first year competing as a lead actress for “Mom” after three consecutive nominations in the supporting race (2014-2016). She won that award twice (2014-2015) even though “Mom” was hardly nominated anywhere else in previous years, so we can see just how much voters love Janney no matter what show she’s on. Her five other awards include four for “The West Wing” (Drama Supporting Actress in 2000-2001, Drama Actress in 2002 and 2004) and one for “Masters of Sex” (Drama Guest Actress in 2014). So Janney is also on the cusp of tying Leachman’s record.

What do you think? Is it down to these two for the win now that nominations have been announced?