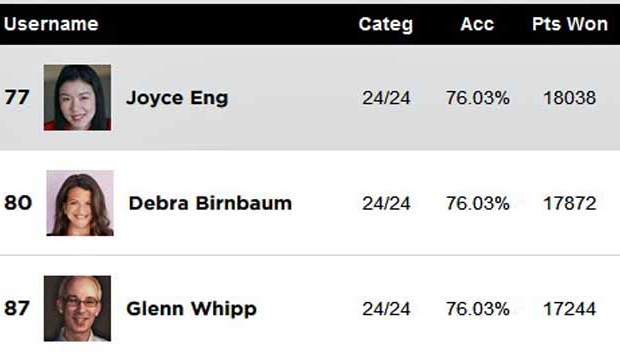 Congratulations to three Experts for topping all others in predicting the 2017 Emmy Awards nominations on Thursday. Debra Birnbaum (Variety), Joyce Eng (TV Guide), and Glenn Whipp (L.A. Times) defeated a group of 20 journalists who cover the entertainment industry throughout the year with the best score of 76.03%.

You can see how your score compares to all others in our leaderboard rankings of all contestants, which also includes links to see each participant’s predictions. to see your own scores, go to the User menu in the top right corner of every page of Gold Derby when you’re signed in to the site. Use drop down menu to go to “View Profile,” then look for the links to your “Award Show Scores.”

After our top three scorers, here is how our other 17 Experts fared in Emmy predictions: Paul Sheehan (Gold Derby) takes the next spot with 74.66% accuracy. We then have a three-way tie with 73.97% between Lynn Elber (Associated Press), Ken Tucker (Yahoo), and Adnan Virk (ESPN). Next up are Tom O’Neil (Gold Derby) and Peter Travers (Rolling Stone) with 73.29% right.