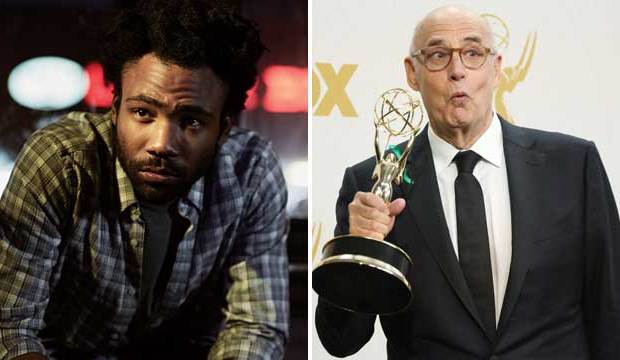 Now that the 2017 Emmy nominees have been announced, the race is really on for Best Comedy Actor. Jeffrey Tambor is nominated for the third year in a row for his performance as a transgender parent Maura Pfefferman in Amazon’s dramedy “Transparent.” He has won the award for the last two years, but no one has won three in a row since Michael J. Fox for “Family Ties” (1986-1988), and “Transparent” was snubbed for the first time for Best Comedy Series. Now in walks Donald Glover (“Atlanta”), who may be perfectly positioned to foil Tambor’s plans for a triple crown. Click here for the complete list of nominees.

Glover is nominated for his role as Earn, a music manager who hopes to guide his cousin’s rap career to financial success for both of them. Glover also created the series and for his various creative contributions to the show he’s nominated for three other awards: Best Comedy Series, Best Comedy Writing (for the episode “B.A.N.”) and Best Comedy Directing (also for “B.A.N.”). A quirky comedy about hip-hop is a far cry from the “Frasiers” and “Modern Families” that usually win Emmys, but the industry has already shown its admiration for the series.

Glover won a Golden Globe for his performance, which isn’t necessarily indicative of Emmy support since the Globes are decided by the Hollywood Foreign Press Association and not the industry professionals who pick the Emmys. However, “Atlanta” was later awarded by the Producers Guild and twice by the Writers Guild. That means Hollywood insiders love the show.

But there may be one downside for Glover in this particular category. Best Comedy Actor will be decided by the TV academy’s actors branch, and the industry actors who make up the SAG Awards failed to nominated “Atlanta” in any categories. That’s not necessarily an insurmountable problem, though. SAG voters are often late to the party. Even Tambor wasn’t nominated at SAG for the first season of “Transparent,” but he won the Emmy anyway.

What do you think? Will Glover win Best Comedy Actor on his first try? Will Tambor continue his winning streak? Or will there be a surprise from someone else?