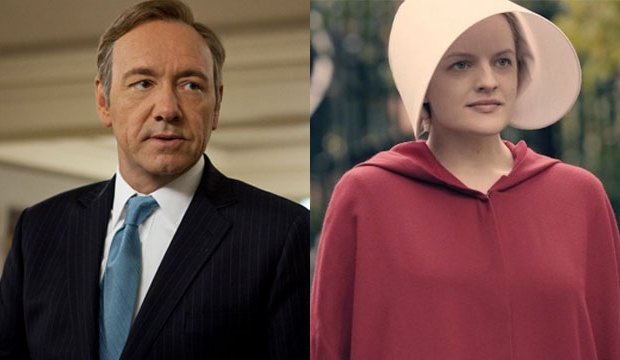 Kevin Spacey may have two Oscars and a Tony but he is still missing an Emmy from his mantle despite 10 nominations to date. He has another chance to right that wrong as he reaped another bid in the Emmy Awards nominations announced on July 13. Spacey contends once again for Best Drama Actor for his performance as the politico Frank Underwood on “House of Cards.” He has lost that race four years running. As a producer of that Netflix series, he contended four times as well for Best Drama Series. He previously lost a pair of bids in 2008 for Best TV Movie/Miniseries Actor for “Recount” and as a producer of the nominated telefilm “Bernard and Doris.”

Elisabeth Moss lost all six of her nominations for playing Peggy Olsen on “Mad Men,” contending five times in lead (2009, 20011, 2012, 2013, 2015) and once in supporting (2010). She was also bested when she vied for her leading role in the 2013 miniseries “Top of the Lake.” Eight nominations may be enough for her to finally win as she is a frontrunner in Best Drama Actress for “The Handmaid’s Tale.”

Tony winner Liev Schreiber has lost three Emmy bids to date. He reaped another three this year, including his third for his leading role in the drama series “Ray Donovan” and two for narration of the documentaries “Muhammad Ali: Only One” and “UConn: March to Madness.”

Below, the list of those who have been invited to the Emmy party on numerous occasions, only to be left sitting in the audience time after time when the winners are announced. (Check out the complete list of this year’s Emmy Awards nominees.)

Four losses
Anna Chlumsky (“Veep”) – all for this role

Angela Bassett (“Master of None”)