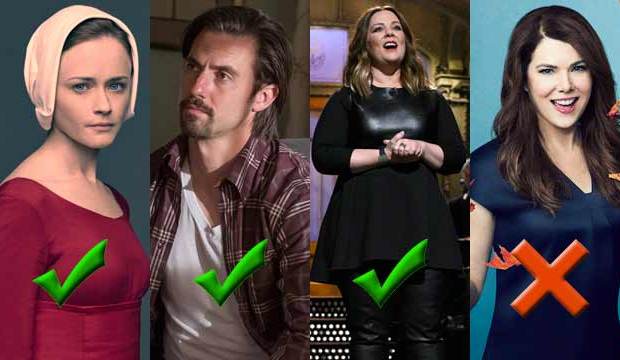 “Gilmore Girls” stars take note: if you want to win an Emmy, all you have to do is stop being on “Gilmore Girls.” That’s one of the strange takeaways from the 2017 Emmy nominations, which were announced Thursday morning, July 13. Three alums from “Gilmore Girls” earned nominations this year — two for the very first time — while the Netflix revival “A Year in the Life” was shut out entirely. That means Lauren Graham is still waiting for her first Emmy nomination after 17 years — what gives, TV academy?

Milo Ventimiglia, Alexis Bledel and Melissa McCarthy all had career breakthroughs on “Gilmore Girls,” which originally ran from 2000-2007, and all three made return appearances in the 2016 Netflix revival. Bledel had a co-leading role as Rory Gilmore, the overachieving daughter of Lorelai (Graham), who had Rory when she was 16-years-old. This season Bledel was also featured in a recurring role in the Hulu original series “The Handmaid’s Tale” as Ofglen, who is forced to bear children for powerful, infertile couples and is also persecuted for her homosexuality. Bledel’s performance earned her a nomination for Best Drama Guest Actress, and she could even get an Emmy upgrade next year since she’s being promoted to a series regular in season two.

Ventimiglia played one of Rory’s love interests, Jess Mariano, your classic bad boy with a heart of gold. Now he’s all grown up and starring in “This is Us” as Jack Pearson, the father three children: a pair of twins, and an adopted third child born on the same day. The actor surprised us this morning by earning a bid for Best Drama Actor alongside his on-screen son Sterling K. Brown.

McCarthy appeared in “Gilmore Girls” as Sookie St. James, Lorelai’s best friend and the chef at Lorelai’s inn. Now McCarthy is nominated for Best Comedy Guest Actress for the fifth time for guest hosting “Saturday Night Live.” She’s been nominated every time she has hosted the sketch comedy show (2012-2014, 2016-2017), but she has yet to win for it. However, she did win Best Comedy Actress in 2011 for her starring role in the CBS sitcom “Mike and Molly.”

The 2016 “Gilmore Girls” revival comprised four 90-minute episodes, which landed the show in the Emmy races for limited series. But it still couldn’t get any traction there. In the show’s history it only ever earned a single Emmy nom, which it won: Best Non-Prosthetic Makeup in 2004 for the episode “The Festival of Living Art.” But perhaps there will be more “Gilmore Girls” in the future, so maybe this isn’t the show’s last chance after all.

Until then, maybe we could book Graham a gig on “This is Us,” “The Handmaid’s Tale,” or “SNL.”