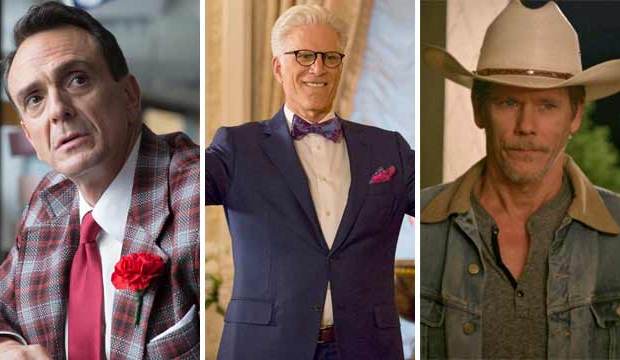 When Emmy nominations are announced on Thursday, July 13, our Experts have a good idea of who will be nominated for Best Comedy Actor. We’ve asked 20 television journalists from top media outlets for their picks. Their top six contenders for nominations include two-time defending champ Jeffrey Tambor (“Transparent”); returning nominees Anthony Anderson (“Black-ish”), Aziz Ansari (“Master of None”), William H. Macy (“Shameless”), and Thomas Middleditch (“Silicon Valley”); and one newcomer, Donald Glover (“Atlanta”), who also happens to be their favorite to win. But there are surprises at the Emmys every year, so if there are unexpected nominees in this category, who might they be?

Azaria has never been nominated in this category, but in other contests over the years he has accumulated 12 bids, winning six. His most recent victory was Best Drama Guest Actor just last year for “Ray Donovan,” and he’s got six trophies for his voice-over work on “The Simpsons.” He could be nominated again for both of those performances as well this year, not to mention his supporting role in the HBO telefilm “The Wizard of Lies.” So he could win as many as four awards this year alone.

Speaking of Emmy darlings, four Experts are predicting Ted Danson as an accentric architect of the afterlife in NBC’s “The Good Place”: Tucker, Eric Deggans (NPR), Matthew Jacobs (Huffington Post) and Jarett Wieselman (Buzzfeed). Danson was nominated in this category 11 times in a row for his role in “Cheers,” winning twice (1990, 1993). One more Comedy Actor nomination would break his longstanding tie with Kelsey Grammer (“Wings” and “Frasier”) and Alan Alda (“M*A*S*H”) for the most ever in the category.

And two Experts, Deggans and Pete Hammond (Deadline), are predicting another past nominee for a brand new show: Kevin Bacon in Amazon’s “I Love Dick,” which was co-created by Jill Soloway, the woman behind “Transparent.” Bacon is primarily known for his work on the big screen, but he did earn one Emmy bid in 2009 for his leading role in the HBO telefilm “Taking Chance.”