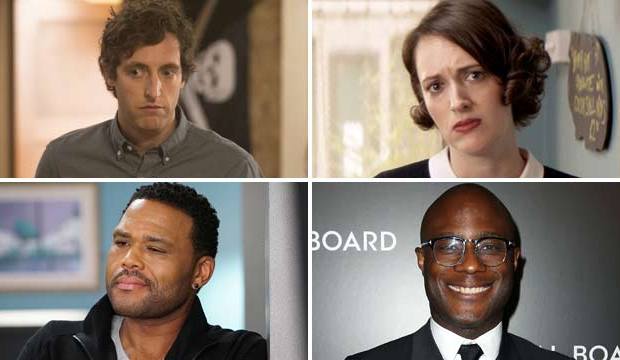 What do you think about the 2017 Emmy nominations, which were just announced on Thursday morning, July 13? Suffice it to say that our forum posters had a lot of thoughts that ranged from “shocked” to “sad” to “depressing” and “eye-rolling” — but don’t worry, there was some good news too.

Naturally, fans are disappointed when their favorites miss out — I for one will need extra therapy hours to get over yet another “Gilmore Girls” shut-out. And in the comedy categories one of the most disappointing snubs was Thomas Middleditch, who earned a Comedy Actor nom last year for “Silicon Valley” only to fall out this year. He was “robbed” because he really deserves to be “winning his third consecutive this year.”

The lack of “Fleabag” nominations also rankled our forum posters, who described it as the “worst snub ever,” while the show’s star Phoebe Waller-Bridge being left out of the Comedy Actress race is “insane.”

“Black-ish” earned a nomination for Best Comedy Series, but under-performed in other categories relative to expectations. In particular, the “brilliant” episode “Lemons,” which reacted to the surprise election of Donald Trump with humor and anger, was left out for Best Comedy Writing and Best Comedy Directing.

Also missing from Best Comedy Directing was recent Oscar winner Barry Jenkins, who could’ve been a contender for a pivotal episode of Netflix’s “Dear White People.” That show was snubbed across the board — not a single nomination for its cast or crew. But at least Jenkins “still has his Adapted Screenplay Oscar” for “Moonlight,” which won Best Picture earlier this year.

What other nominations — or lack of nominations — got our forum posters fired up? Check out some more of their comments below, and join the discussion now.

AayaanUpadhyaya: “‘Veep’ has this completely locked.”

Nate: “I am shocked that ‘Transparent’ was not in the series category!”

LegendOfMatt: “I think ‘Veep’ will easily win again, but I think writing will go to ‘Master of None’ again, because ‘Thanksgiving’ is the best episode of the entire series, and directing will go to ‘Atlanta’ because ‘B.A.N.’ is too special of an episode to pass up.”

Teridax: “I had ‘Kimmy Schmidt’ getting snubbed in Series due to its four nominations last year, yet ‘TRANSPARENT’ gets snubbed, even though it was nominated for 10 Emmys last year and won three of them, including Lead Actor and Directing? At least I called ‘Modern Family’s’ nomination for it’s eighth season.”

David Buchanan: “‘Veep’ added a nomination from last year for an all-time high of 17, so I’d hardly say it underperformed, especially in what almost everybody considered a weaker season than last year’s. With the exception of MacNicol, I don’t think the majority of people though Phillips or Simmons would get in.”

Aayaan Upadhyaya: “Jeffery Tambor is winning his third. Despite being dropped from Comedy Series, ‘Transparent’ still got seven nominations (more than ‘Atlanta,’ ‘Black-ish’ or ‘Shameless’). And the acting branch watches the show.”

GusCruz: “The Middleditch snub is just sad. I thought he had a chance of winning this year.”

Riley: “Middleditch should be winning his third consecutive this year. I want to spread the wealth to Will Forte and Andy Daly, but I cannot help but to award Middleditch each year in my personal awards because he is just so good each time.”

ProfessorChaos: “Thomas Middleditch was robbed. I’m thinking that season finale airing on the last day of voting hurt him.”

SkyLight: “I am hoping for a miracle and somebody else other than [Julia Louis-Dreyfus] wins this year.”

BenitoDelicias: “I’m not counting on it but either some magical show we haven’t heard about comes along or we’re stuck with Dreyfus next year too.”

eastwest: “Kicking myself for buying into that Phoebe Waller-Bridge bull and dropping Pamela Adlon. Had Adlon in and out of my predix all season. Thought her name recognition would be enough and the good buzz and they were. Boo for no Issa Rae!”

AayaanUpadhyaya: “I am glad for Pamela. But how does Phoebe Waller-Bridge not get in? This is insane.”

BenitoDelicias: “At least Tituss Burgess is nominated which is all I care about honestly. He won’t win because that’s the way things go, but he should. ‘Veep’ wins again, so does Dreyfus (kind of crazy to think about anybody else winning that).”

lovelylovely: “I definitely went down with the Timothy Simons ship and I’m not ashamed of it. Also bummed they snubbed Peter MacNicol for Comedy Guest Actor, but nominated Hugh Laurie.”

smurty11: “In a show full of awful people, Tony Hale and Matt Walsh’s characters are the more sympathetic, especially Walsh’s if you saw the finale. I’m not that surprised.”

natehall3: “Comedy Supporting Actress is bizarre to me. I mean I’m an ‘SNL’ fan but three nominees was a little overboard. Also no Gaby Hoffmann OR Jane Krakowski OR Rita Moreno?! They were all very deserving.”

BenitoDelicias: “Shocked by those Leslie Jones and Vanessa Bayer nominations. Nice gift for Jones and all her troubles and a nice goodbye gift for the always amazing Bayer.”

GusCruz: “Last year Poehler/Fey won Guest even though there were two other ‘SNL’ nominees. KcKinnon is the only realistic ‘SNL’ contender in her category so I don’t really buy the vote-splitting theory. I do, however, think that her having won before could be an issue. And she does not have the Hillary buzz anymore.”

SEEEmmys shocker: ‘Saturday Night Live’ and ‘Westworld’ have the most nominations

Teridax: “I know everyone is going to say how ‘Black-ish’ was snubbed for Writing and Directing for ‘LEMONS’ but I’m just going to go ahead and say it anyway: The brilliant ‘Black-ish’ episode ‘LEMONS’ was SNUBBED for Kenya Barris’ writing and directing, and I would even argue for John Peter Bernardo and Jamie Pedroza’s editing!”

Atypical: “Barry Jenkins missing out in Directing [for ‘Dear White People’] is both depressing and eye-rolling.”

Teridax: “You know, I thought that he was the one nomination that was a sure thing for ‘Dear White People.’ At least he still has his Adapted Screenplay Oscar and bragging rights for having co-wrote and directed an Academy Award winner for Best Picture. I think that should be good consolation.”