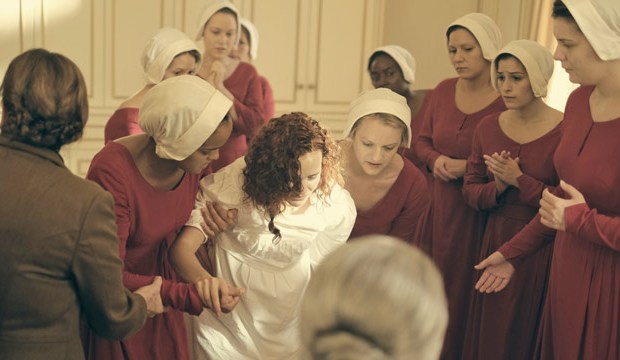 With two-time reigning champ “Game of Thrones” sitting out this awards cycle, our Emmy experts from major media outlets are split on what will win Best Drama Series. However, three such pundits — Kerr Lordygan (Rotten Tomatoes), Glenn Whipp (Los Angeles Times) and Jarett Wieselman (Buzzfeed) — think that Hulu’s “The Handmaid’s Tale” could give birth to a real jawdropper on Emmy night.

Led by Elisabeth Moss, “The Handmaid’s Tale” is based on the novel by Canadian author Margaret Atwood and tells the story of a dystopian future where lower class, fertile women are forced to bear children for rich couples. If this trio of experts is correct, Hulu would enter the history books as the first streaming service to take home the top prize at the Emmys. Something tells us that would make rival company Netflix quite jealous.

But not to worry, Netflix. As of this writing we’ve polled 20 TV journalists from top media outlets for their Emmy picks, and nine of them predict a victory for “The Crown.” They are: Debra Birnbaum (Variety), Joyce Eng (TV Guide), Pete Hammond (Deadline Hollywood), Matthew Jacobs (Huffington Post), Lynette Rice (Entertainment Weekly), Matt Roush (TV Guide Magazine), Anne Thompson (Indiewire), Peter Travers (Rolling Stone) and Adnan Virk (ESPN). Centered around the early reign of Queen Elizabeth II of England, “The Crown” stars recent SAG winners Claire Foy as the Queen and John Lithgow as Winston Churchill. The show also recently won the Golden Globe for Best TV Drama, so an Emmy seems to be the logical next step.

The remaining two Emmy seers — Michael Ausiello (TV Line) and Bonnie Fuller (Hollywood Life) — are going out on a limb for Netflix’s “Stranger Things.” The sci-fi series set in the 1980s took home the top prizes at the SAG and PGA Awards this year, making it a force to be reckoned with at the Emmys. However, might the show’s 15-month drought hurt its Emmy chances, as Season 2 doesn’t debut until Halloween? See all of the “Stranger Things” Emmy submissions.

None of our experts are currently predicting a victory for any other Best Drama Series hopefuls, but 17 out of 20 believe that “The Americans” will earn its second consecutive nomination in the category. FX’s Russian spy series, which is more timely than ever before, took four years to finally get into the top race and now it looks as though it will stay there for this penultimate season.

HBO’s sci-fi/western “Westworld” is next in line, with 17 journalists forecasting that it’ll take over the slot that’s usually held by “Game of Thrones.” Amazingly, since HBO first made a splash in the Best Drama Series race with “The Sopranos” in 1999, the premium channel has had at least one drama nominated every year except for 2008. This year could continue the trend for either “Westworld” or “The Leftovers,” which has the support of three pundits.

Sixteen prognosticators believe that AMC’s legal program “Better Call Saul” will earn a third consecutive series bid. A spinoff of Emmy fave “Breaking Bad,” it’s a crime that the Bob Odenkirk-fronted drama hasn’t yet won an Emmy Award in any category. Will that all change this year thanks to the drama’s third season that aired to critical acclaim? The show is also getting Emmy buzz for several of its cast members, which is always a good sign.

“House of Cards” was the final drama to debut before the end of 2017 Emmy eligibility, and four odds-makers think that’ll help the Netflix political drama earn its fifth bid in the category. Starring Kevin Spacey as the duplicitous President Frank Underwood and Robin Wright as his V.P. wife Claire, Emmy voters may have felt the urge to stream the new season all at once as a way to escape from real-life politics.

Next up, “The Good Fight” has two Emmy gurus predicting it’ll earn a top series bid. CBS All Access’s drama is a spinoff of “The Good Wife” that stars Christine Baranski in the lead role, and voters were sent the entire first season on DVD in a savvy move by the TV studio to make sure that everyone had a chance to see it.

Rounding out the likely contenders, one expert apiece thinks that each of the following series will receive a nomination for Best Drama Series: FX’s “Legion,” Netflix’s “Orange is the New Black,” OWN’s “Queen Sugar,” Showtime’s “Homeland” and Netflix’s “13 Reasons Why.”