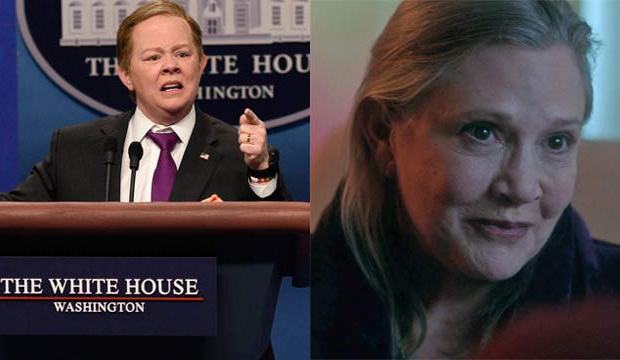 Since “Saturday Night Live” guest hosts were moved into the comedy guest acting categories at the Emmys in 2009, the NBC sketch comedy has earned 12 nominations and three wins: Tina Fey in 2009, Betty White in 2010, and Fey with Amy Poehler jointly in 2016. Melissa McCarthy has yet to win despite four previous nominations (2012-2014, 2016). This spring she joined the “SNL” five-timers club, and she could finally take home the gold in this category thanks to her headline making performances as embattled White House press secretary Sean Spicer.

It was a political parody that won Fey her first guest-hosting Emmy: she played then-vice presidential candidate Sarah Palin. And of course Kate McKinnon won Best Comedy Supporting Actress at the Emmys last year for her various characters including Hillary Clinton. So politics are popular with Emmy voters when it comes to “SNL.” But McCarthy isn’t the only “SNL” host who may be in the running. Seven-time Emmy nominee Kristen Wiig is aiming for her first victory. And movie stars Kristen Stewart, Octavia Spencer and Scarlett Johansson could also receive TV academy support.

Then there’s Carrie Fisher. The actress had a recurring role in the Amazon comedy series “Catastrophe” as Rob Delaney‘s mother, and her guest appearance in the third season finale was one of the last performances she filmed before her sudden death last December at age 60. She earned two previous Emmy nominations: one in this category for “30 Rock” (2008) and one for Best Variety Special for her one-woman show “Wishful Drinking” (2011).

Other top contenders may include “The Big Bang Theory” guests Christine Baranski and Laurie Metcalf, both of who were nominated last year. “A Series of Unfortunate Events” boasts past Emmy champs Joan Cusack and Alfre Woodard, while other Netflix shows could reap bids for past Emmy and Oscar nominee Angela Bassett (“Master of None”) and Laura Dern (“Unbreakable Kimmy Schmidt”).

And there’s more where that came from. Make your predictions now to let us know who you think the top contenders are for Best Comedy Guest Actress.

Julianne Moore reveals she was fired from 'Can You Ever Forgive Me?': 'It's still kind of painful'…

LGBT Oscar snubs: 'Can You Ever Forgive' the academy for overlooking these queer films?

'Holmes and Watson' and Trump and McCarthy win at the Razzie Awards, but it wasn't all bad…

Nate Heller ('Can You Ever Forgive Me?' composer) on writing a jazzy score for his sister's film…

'Can You Ever Forgive Me?' would be 2nd consecutive film to sweep Best Actress and Supporting Actor…