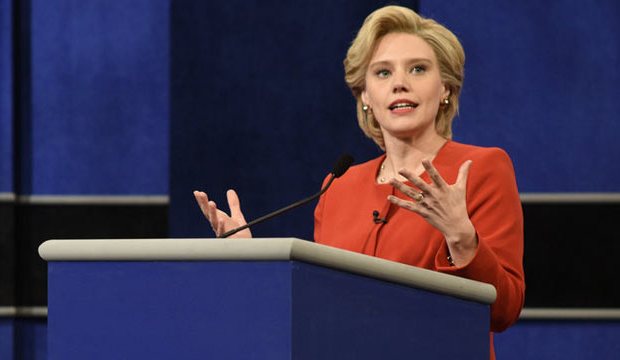 It was a surprise when Kate McKinnon won the Emmy for Best Comedy Supporting Actress last year. She was the first regular cast member from “Saturday Night Live” to win since the show’s actors started competing in comedy categories in 2008. But while last year’s victory was an upset, this year McKinnon is the overwhelming frontrunner to win according to our Experts. Almost all of them pick her to repeat — but there’s one holdout.

McKinnon plays myriad characters on “SNL,” and Emmy voters love to reward actors for playing multiple roles — they can vote for several performances for the price of one — but there’s one role in particular that will likely give McKinnon a boost this year. She played Democratic presidential candidate Hillary Clinton throughout the election campaign, from her debates against Donald Trump to her upset loss in November. McKinnon even performed Leonard Cohen‘s “Hallelujah” in character as a dual tribute to Clinton and to Cohen, who had just died — she submitted that episode to Emmy judges for consideration.

On top of that, “SNL” is tied as the most nominated program of the year with a whopping 22 Emmy bids, including more acting nominations than any other series, though that could work against her as much as for her. McKinnon is joined in the Comedy Supporting Actress race by her co-stars Leslie Jones and Vanessa Bayer, so there’s a risk of splitting the vote.

That could be good news for Judith Light (“Transparent”), whom Kerr Lordygan (Rotten Tomatoes) is predicting for an upset victory. “Transparent” lost a little ground this year with seven nominations — down from 10 last year. And the Amazon series was left out of Best Comedy Series for the first time. But Light received widespread acclaim for her performance last fall in the show’s third season, and though she’s nominated against a co-star (surprise contender Kathryn Hahn), she only has to worry about splitting votes with one co-competitor instead of two.

So which of our Experts are right? Or are they all underestimating the remaining four contenders: Hahn, Jones, Bayer and Anna Chlumsky (“Veep”)?