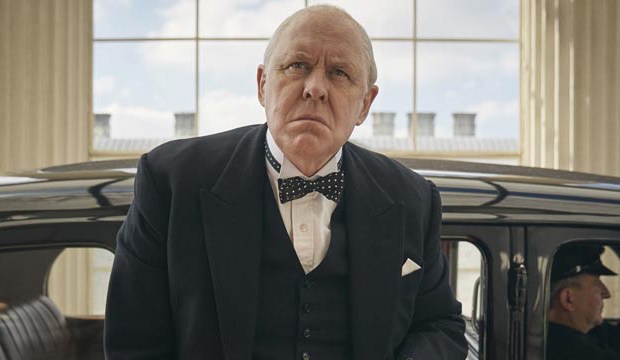 Netflix’s drama “The Crown” won two Emmys at this weekend’s Creative Arts ceremony: Best Costumes and Best Production Design. Heading into the Primetime ceremony on Sunday night, John Lithgow has a great shot of upping “The Crown’s” Emmy haul in the category of Best Drama Supporting Actor. In fact, Lithgow is holding steady as the frontrunner with overwhelming 2/9 racetrack odds for his role as Winston Churchill, which translates to a whopping 82% chance of winning.

The veteran actor has claimed five Emmys over the course of his career, winning Drama Guest Actor prizes for “Amazing Stories” (1985) and “Dexter” (2010), and Best Comedy Actor for “3rd Rock from the Sun” (1996, 1997, 1999). Lithgow’s performance in the ninth episode of “The Crown,” entitled “Assassins,” was submitted to Emmy voters. For this role, Lithgow has already earned trophies from both Critics’ Choice and the Screen Actors Guild, so will the Emmys follow suit?

Lithgow’s 2017 Emmy competitors are Jonathan Banks (“Better Call Saul”), David Harbour (“Stranger Things”), Ron Cephas Jones (“This Is Us”), Michael Kelly (“House of Cards”), Mandy Patinkin (“Homeland”) and Jeffrey Wright (“Westworld”). None of these nominees have won before for these roles. Reigning category champ Ben Mendelsohn (“Bloodline”) was nominated down in the guest category this year, losing to Gerald McRaney (“This Is Us”).

Jones portrays William on NBC’s family drama “This Is Us,” the cancer-stricken biological father of Sterling K. Brown‘s Randall. This is Jones’ first awards notice after decades working in film and television. He comes in second place in our Emmy predictions with 10/1 odds.

In third place at 28/1 odds is Harbour, who plays local police chief Jim Hopper on Netflix’s sci-fi series set in the 1980s about the supernatural occurrences surrounding the disappearance of a young boy. This is Harbour’s first Emmy nom, and he also scored a 2005 Tony bid for “Who’s Afraid of Virginia Woolf.”

Wright takes on the fan favorite character of Bernard on HBO’s sci-fi/western series “Westworld.” He’s clearly an industry favorite, as he previously prevailed at the Emmys and Golden Globes for his supporting turn in “Angels in America” (2003). He has 40/1 odds of winning for “Westworld.”

Banks is back again for his fan-favorite AMC role as hired gun Mike Ehrmantraut. Banks is already in the Emmy record book for being nominated in this category for three different series: “Better Call Saul” as Mike (2015-2017), “Breaking Bad” also as Mike (2013), and “Wiseguy” as Frank McPike (1989). He has 66/1 odds of winning for “Better Call Saul.”

Kelly is back once again for his role as White House chief of staff Doug Stamper on Netflix’s “House of Cards.” In a savvy move, the new season debuted right at the end of Emmy’s eligibility period, which likely helped put the two-time nominee (2015, 2016) top of mind during voting. He has 80/1 odds of winning for “House of Cards.”

Patinkin has garnered his third Emmy bid as CIA operative Saul Berenson on Showtime’s “Homeland.” This marks the actor’s sixth career nomination, having previously been recognized for “Chicago Hope” in 1995 and 1999, winning on the first occasion, and “The Larry Sanders Show” in 1992. He has 80/1 odds of winning for “Homeland.”