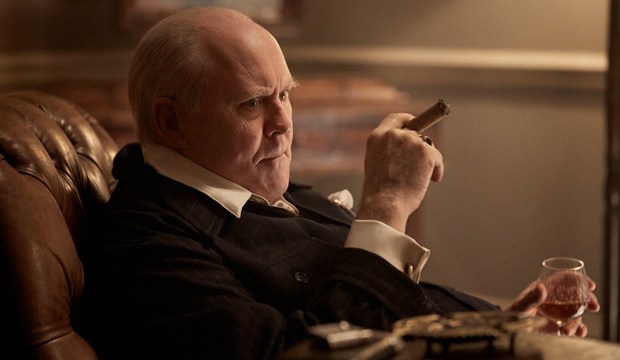 John Lithgow is already a five-time Emmy champ for “Amazing Stories” (1986), “3rd Rock From the Sun” (1996, 1997, 1999) and “Dexter” (2010), and now a victory for “The Crown” as British Prime Minister Winston Churchill seems like a no-brainer. According to our Emmy experts from major media outlets, Lithgow is so far out front to win Best Drama Supporting Actor that it’d be a monumental shocker if he were to lose.

One of our remaining Emmy gurus is betting on a victory for Ron Cephas Jones (“This Is Us”): Glenn Whipp (Los Angeles Times). NBC’s family drama “This Is Us” was the breakout hit of the season, with Jones playing the cancer-stricken biological father of Sterling K. Brown‘s Randall. This would be Jones’ first awards notice after decades working in film and television. In our recent webchat Jones told us that he loves playing William because, “He’s a flawed man, but a very intelligent, artistic, loving man who made some mistakes in his past life.”

And Ed Harris (“Westworld”) could pull off an upset, says Jarett Wieselman (Buzzfeed). The film star has a pair of Emmy nominations on his resume for “Empire Falls” (2005) and “Game Change” (2012), but this would be his first bid for a regular TV series gig. Harris plays the mysterious Man in Black on HBO’s “Westworld,” whose true identity was revealed in the season finale. Harris is a four-time Oscar nominee for “Apollo 13” (1995), “The Truman Show” (1998), “Pollock” (2000) and “The Hours” (2002), but he’s never yet been anointed by either the film or television academies. Might his villainous role as Man in Black finally do the trick?

None of our Emmy experts are currently predicting a victory for any other Best Drama Supporting Actor hopefuls, but 19 out of 20 believe that Jonathan Banks (“Better Call Saul”) will be nominated again as hired gun Mike Ehrmantraut. Banks is already in the Emmy record book for being nominated in this category for three different series: “Better Call Saul” as Mike (2015 and 2016), “Breaking Bad” also as Mike (2013), and “Wiseguy” as Frank McPike (1989). Can Banks finally triumph this year?

Nineteen Emmy seers believe that Ed Harris’ co-star Jeffrey Wright (“Westworld”) will earn a nomination. Wright takes on the fan favorite character of Bernard, who had more than one jawdropping moment in Season 1. Wright prevailed at the Emmys and Golden Globes for his supporting turn in “Angels in America” (2003), so he’s clearly an industry favorite.

Nine Emmy pundits have Michael Kelly getting nominated once again for his role as White House chief of staff Doug Stamper on Netflix’s “House of Cards.” The new season debuted right at the end of the Emmy eligibility period, which could have helped put the two-time nominee (2015, 2016) top of mind during the recent voting period.

Jonathan Banks’ co-star Michael McKean (“Better Call Saul”) is next in line with the support of six Emmy prognosticators. McKean earned a Critics’ Choice nomination last year for the show’s second season, but his role was greatly increased in Season 3 (particularly in the episode “Chicanery“) so we’re hoping Emmy voters were paying attention.

Jared Harris (“The Crown”), though technically a guest star, must compete in the supporting race because he appeared in too many episodes to quality for the guest category. He plays King George VI, father to Claire Foy‘s Elizabeth II, and six Emmy gurus predict he’ll earn a second career nomination after his 2012 bid for “Mad Men.”

Oscar winner Jon Voight (“Coming Home”) is predicted to return to the Emmy race by eight journalists. The four-time also-ran (“Uprising” in 2002, “Pope John Paul II” in 2006, “Ray Donovan” in 2014 and 2016) hopes to have better luck this time around for his Showtime drama, where he takes on the role of the title character’s father Mickey Donovan.