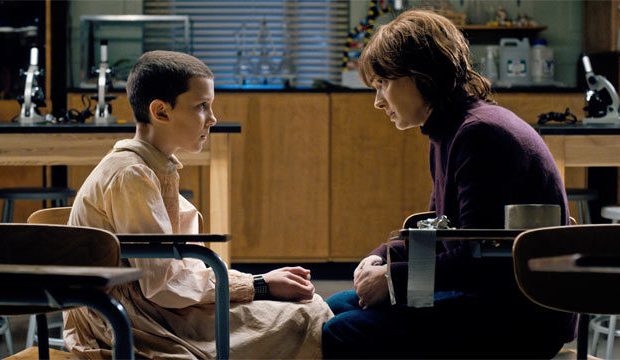 In the Emmy race for Best Drama Supporting Actress, our experts from major media outlets predict that we’ll see both “Stranger Things” supporting ladies nominated: Millie Bobby Brown as Eleven and Winona Ryder as Joyce Byers. Thirteen-year-old Brown is undoubtedly TV’s breakout star of the year thanks to Netflix’s 1980s-set sci-fi drama. An Emmy victory for Brown would make her one of the youngest recipients in TV history, but she must watch out for Ryder, a two-time Oscar nominee for “The Age of Innocence” (1993) and “Little Women” (1994). Who will win?

As of this writing we’ve polled 18 TV journalists from top media outlets for their Emmy picks, and two of them predict Brown will prevail: Pete Hammond (Deadline) and Peter Travers (Rolling Stone). Meanwhile, one journalist — Paul Sheehan (Gold Derby) — forecasts a victory for Ryder. See how all the experts rank the Best Drama Supporting Actress contenders.

The remaining two Emmy gurus opt for Vera Farmiga (“Bates Motel”): Kerr Lordygan (Rotten Tomatoes) and Tom O’Neil (Gold Derby). This 2013 Emmy nominee for Best Drama Actress is now competing in the supporting race because of her reduced screen time, but it’s hard to deny that Farmiga chewed every bit of scenery in the fifth and final season of the A&E hit drama. But are Emmy voters too chicken to reward a horror show?

None of our experts are currently predicting a victory for any other Best Drama Supporting Actress hopefuls, but 11 of the 18 believe that Uzo Aduba (“Orange is the New Black”) will earn a bid her portrayal of Suzanne “Crazy Eyes” Warren. Aduba has had a unique Emmy history so far, winning Best Comedy Guest Actress in 2014, winning Best Drama Supporting Actress in 2015, and then being snubbed in 2016.

Margo Martindale has already won two guest-star Emmys for taking on the role of KGB handler Claudia on FX’s “The Americans,” but this year she’s jumping up to the supporting race due to her increased screen time. Martindale previously prevailed in this category for “Justified” (2011), and now six Emmy pundits think the fan-favorite actress will earn yet another supporting nomination.

Six prognosticators believe that last year’s nominee Maura Tierney (“The Affair”) will be back again for portraying jilted ex-wife Helen Solloway on the sexy Showtime drama. Golden Globe champ Tierney and Critics’ Choice winner Constance Zimmer (“UnReal”) are the only two returning contenders in this year’s Drama Supporting Actress Emmy race, with Zimmer getting the support of a single expert.

Character actress Ann Dowd (Aunt Lydia on “The Handmaid’s Tale”) is next in line with four journalists picking her for a nomination. Dowd is a former SAG contender for “Captain Fantastic” (Best Film Ensemble, 2016) and she could earn an additional guest star bid this year for her final appearance on “The Leftovers.”

And Aisha Hinds (“Underground”) rounds out our experts’ picks with three of them predicting she will earn her first Emmy nomination. On the WGN America series, Hinds plays famed abolitionist Harriet Tubman, describing the experience as “something that truly excited me, but at the same time it was equally daunting for me.”

Paul Graff ('Stranger Things' VFX supervisor) on reinventing a monster: 'The moisture, the wetness' are…

Paul Reiser ('The Kominsky Method') on physical transformation: 'It looked so convincing, it was…