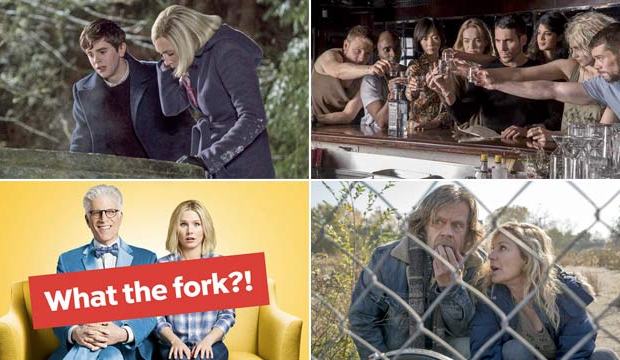 The 2017 Emmy nominations will be announced July 13, and Gold Derby’s odds-makers think they know what will be nominated. But what TV shows SHOULD be nominated? Below, see four Emmy underdogs I’m rooting for — two dramas and two comedies — that in a just world should definitely be hearing their names called on nominations morning. I’ve got my fingers crossed for these four underrated gems. What Emmy underdogs are YOU championing?

“Bates Motel” (A&E) — After five seasons the charming yet murderous “Bates Motel” closed its doors this year and simultaneously gave us one of the best series finales in recent memory. Vera Farmiga is earning major Emmy buzz as the doomed Norma Bates, but I’m also hoping her TV son Freddie Highmore (as Norman Bates) scores his first career bid. “Bates Motel” left the airwaves as an even better show than when it began, and that should be commended in the form of an Emmy statuette.

“Sense8” (Netflix) — The internet nearly exploded last month when Netflix cancelled and then later revived “Sense8” for a wrap-up movie, reminding us all of the power of cult TV fandom. While the first season of this genre-bending, space-traversing sci-fi drama was skunked last year other than a bid for Best Main Title Theme Music (Johnny Klimek and Tom Tykwer), I’m wondering if all of the positive press could actually help “Sense8” stay top-of-mind with Emmy voters this year.

“The Good Place” (NBC) — TV’s most inventive series was recently nominated by the TCA Awards as Best New Program, and for good reason. Starring Ted Danson as a mysterious godly figure and Kristen Bell as Eleanor Shellstrop, a terrible person who dies and inexplicably wakes up in the Good Place, the show is one of the best broadcast offerings of the past several years. Don’t make me send you on the train to the Bad Place, Emmy voters.

“Shameless” (Showtime) — Having now completed seven seasons, this Showtime hit dramedy is still keeping fans entertained. The most recent season took an unexpectedly dramatic turn for Frank (William H. Macy) and Monica (Chloe Webb), proving that “Shameless” has some life left in it after all these years. Macy was recently honored with the SAG Award for Best Comedy Actor, so clearly many within the industry are still watching.