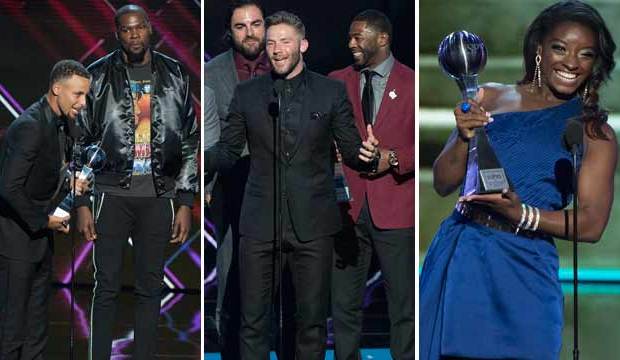 The 25th Annual ESPY Awards were handed out on Wednesday night, July 12, and the winners represented a broad spectrum of athletic achievements, with basketball stars among the biggest winners. At the end of the night the award for Best Team went to the Golden State Warriors, the 2017 NBA champions. The MVP of those finals was Kevin Durant, who won Best Championship Performance for his efforts. See the complete list of winners here.

This was the first ESPY win for the Golden State Warriors as Best Team, though NBA teams have now won nine of the last 16 awards in this category. NBA stars also continued an impressive winning streak in the category of Best Male Athlete, which was awarded to Russell Westbrook of the Oklahoma City Thunder. Westbrook set a record for the most triple-doubles in a season with 42. He’s the seventh basketball player in a row to prevail, though it’s Westbrook’s first win. Basketball stars have accumulated eight total victories for Best Male Athlete, which makes it the category’s most awarded sport.

Best Female Athlete went to gymnast Simone Biles following her dominant Olympic performance last summer in Rio de Janeiro. This was her first victory in the category and only the second victory for a gymnast following fellow Olympic champion Nastia Liukin in 2009.

The NFL was also well rewarded tonight, with the New England Patriots taking Best Game for their come-from-behind victory over the Atlanta Falcons in Super Bowl LI earlier this year. Green Bay Packers quarterback Aaron Rodgers took home a pair of awards: Best NFL Player and Best Play for his remarkable 35-yard pass to Jared Cook that helped them defeat the Dallas Cowboys during the playoffs in January.

Other winners included Michael Phelps for Best Record-Breaking Performance for extending his Olympics record as the most decorated athlete of all time, the Chicago Cubs for Best Moment for winning their first MLB World Series in 108 years, and football player Dak Prescott for Best Breakthrough Athlete.

DISCUSSthe ESPY Awards with Hollywood insiders in our notorious forums