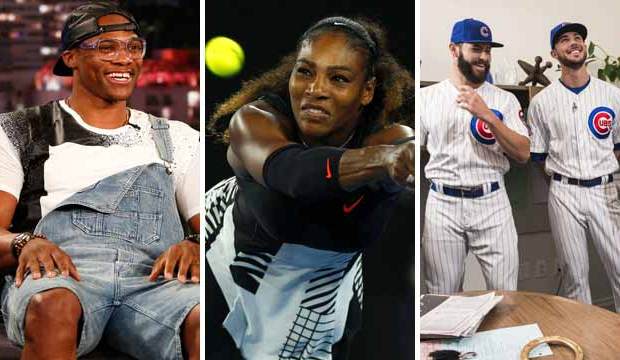 The 25th Annual ESPY Awards will be handed out tomorrow night, June 12, during a ceremony broadcast live on ABC and hosted by football player Peyton Manning. Honoring the best achievements in sports, winners were decided by fans voting online after the nominees were determined by the ESPY Select Nominating Committee.

We’re predicting eight top races. Scroll down to find out who we’re betting on based on the combined picks of our users. Nominees are listed in order of their racetrack odds with our projected winners listed in gold.

Russell Westbrook is the frontrunner for Best Male Athlete. The NBA star is point guard for the Oklahoma City Thunder, a six-time All-Star, and the MVP in the All-Star Game in both 2015 and 2016. Westbrook would be the sixth basketball player in a row to win this prize, but this would be his first victory in the category.

Meanwhile, tennis champion Serena Williams is the favorite to win Best Female Athlete in what would be a historic victory. She claimed the award twice before (2003 and 2013), and no woman in the 25-year history of the ESPYs has won three times. Currently Williams is tied with soccer player Mia Hamm, golfer Annika Sorenstam, skier Lindsey Vonn and MMA fighter Ronda Rousey with two victories apiece.

The award for Best Team is expected to go to the Chicago Cubs for the first time after a historic season that saw them win the World Series title for the first time since 1908. Those 108 years without winning marked the longest drought in Major League Baseball history, so overcoming baseball’s drought at the ESPYs should be child’s play in comparison. The last MLB team to win this award was the Boston Red Sox back in 2005 following their own historic World Series victory.

Do you agree with our predictions? Check them out below, and make or edit your own predictions until the awards are handed out on Wednesday night.

DISCUSSthe ESPY Awards with Hollywood insiders in our notorious forums