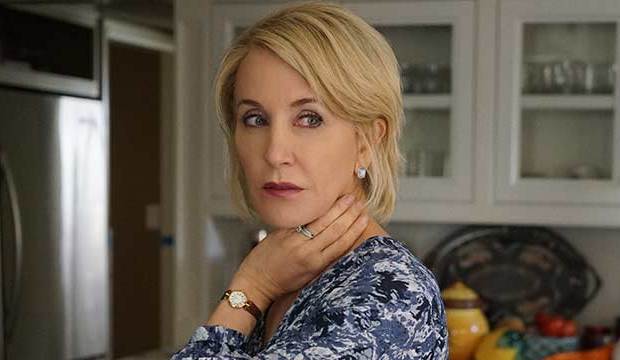 Felicity Huffman has been nominated for Best Movie/Mini Actress for the last two years in a row at the Emmys for playing different characters in the ABC anthology series “American Crime,” but this year she’s on the bubble for a nomination according to our latest racetrack odds. Are we underestimating her? Some of our forum posters think so.

In the third and final season of “American Crime” — it was cancelled after it aired this spring — Huffman played Jeanette Hesby, who is married into a family that owns an industrial farm. She becomes torn between family loyalty and her conscious after an accident kills numerous migrant workers. This is another significant departure from her previous “Crime” performances as the racist mother of a murder victim in season one and the calculating headmaster of a private school in season two.

In addition to her nominations for “Crime,” Huffman also has two previous bids for Best Comedy Actress for “Desperate Housewives,” winning for that show’s first season in 2005. She’s also an Oscar nominee for her performance as a transgender woman in “Transamerica” (2005), and we’ve seen many times in the past how much the Emmys love actors with Oscar prestige.

However, there is a surplus of Oscar contenders in this race, led by the stars of “Feud” (Jessica Lange and Susan Sarandon) and “Big Little Lies” (Nicole Kidman and Reese Witherspoon). Actually, it was Witherspoon’s performance in “Walk the Line” that beat Huffman for the Oscar 12 years ago. But Emmy voters have proven they like “American Crime,” and they’ve proven they’re fans of Huffman, so it would be foolish to dismiss her as a strong contender.

Read some of our forum posters’ comments about Huffman below, and join the discussion now.

Andrew Carden: “I still don’t quite buy [Oprah Winfrey] as a nominee. I think Huffman returns.”

SayMyName: “Felicity Huffman should win IMHO. I love Kidman, Witherspoon, I like Lange and Sarandon, but Huffman was just easily the best out of all these amazing women. It’s so sad to see that people predict Oprah and [Carrie Coon] over her. Even if the Emmys are sometimes not about the performance, Huffman is an industry-fave, married to another one.”

Riley: “I am seriously considering SAG nominee Felicity Huffman now that I have finished ‘Fargo.’ Carrie Coon has goodwill, but Huffman has name recognition. I doubt that the Emmys care about ‘American Crime’ anymore, but Coon’s ‘Fargo’ performance is not really something that I would expect the Emmys to go for in such a competitive category, so the pros and cons of these two make for a fair fight.”

Kevin: “I think people are really overestimating Coon’s love in the industry. Of course, I could be completely wrong, but against Huffman, a 2x nominee in this category, I’m inclined to think she’s missing out.”