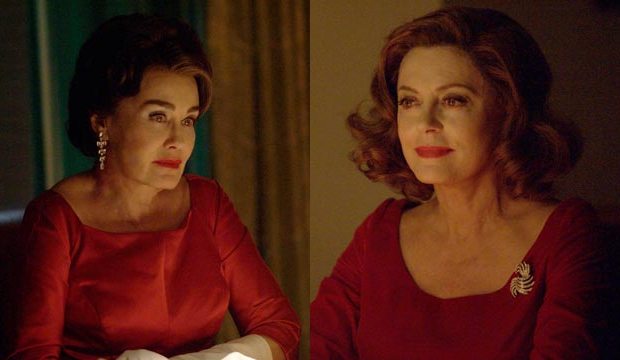 When Jessica Lange and Susan Sarandon face off at the Emmy Awards next month as nominees for “Feud: Bette and Joan,” they may well feel a sense of déjà vu. After all, it won’t be the first time the two leading ladies have “feuded” for a chunk of Hollywood gold.

Back in 1994, the pair was part of a most fascinating race for the Academy Award for Best Actress. Lange contended for her role as an emotionally troubled Army wife in “Blue Sky.” The picture was  completed in 1991, but sat on the shelf for three years due to the bankruptcy of Orion Pictures. Playing in just a few hundred theatres for a single week in September and grossing less than a million dollars, it looked like a most unlikely awards vehicle. Lange was already an Oscar recipient, for her supporting turn in in 1982’s smash comedy “Tootsie.” Her four lead actress nominations, for 1982’s “Frances,” 1984’s “Country,” 1985’s “Sweet Dreams” and 1989’s “Music Box,” had all been unsuccessful.

Meanwhile, Sarandon was gunning for a fourth shot at Best Actress after previous bids for 1981’s “Atlantic City,” 1991’s “Thelma and Louise” and 1992’s “Lorenzo’s Oil.” (She was notably overlooked for her well-received performance in 1988’s “Bull Durham.”) Observers in 1994 were initially uncertain if her awards attention would be for the summer legal thriller “The Client” or the end-of-year family drama “Safe Passage.” Given her recent losses and high popularity with both industry members and moviegoers, the actress was increasingly being seen as overdue for the Academy’s recognition.

However, by the end of the year, Lange was looking more and more like an Oscar frontrunner. The Los Angeles Film Critics Association named her best actress, while the New York Film Critics Circle selected Linda Fiorentino for her portrayal of a diabolical femme fatale in “The Last Seduction.” Lucky for Lange, Fiorentino would be unable to seduce Academy voters, as her film had aired on HBO before playing in cinemas. The studio filed suit against the AMPAS to challenge the movie’s Oscar ineligibility, but to no avail. Late film historian Robert Osborne told the E! channel that the predicament of “The Last Seduction” was unfortunate, as Fiorentino would have had “a very good chance of winning the Academy Award.”

Lange’s hopes continued to rise when she received the Golden Globe Award for Best Actress in a Motion Picture – Drama over chief rival Jodie Foster as a woman raised in an isolated cabin in “Nell.” (Curiously, Sarandon wasn’t even nominated.) Lange delivered a lengthy and emotional acceptance speech – the classic “Oscar audition,” as Gold Derby founder Tom O’Neil often calls it.

On February 14, 1995, the academy handed out Valentines to both Lange and Foster. Sarandon was shown love, too – for “The Client.” The late film critic Gene Siskel was asked on the CBS News morning show if Sarandon might expect some sort of career achievement award for her work. Siskel opined that it wasn’t “a strong enough character in a strong enough film,” and that it was Lange who would likely get the prize. He added that Orion’s misfortunes actually benefitted Lange, as academy members were “fascinated by bankruptcy.” Speaking on “Good Morning America,” ABC’s late film critic Joel Siegel shared Siskel’s prediction, reporting that Oscar voters who had screened “Blue Sky” had “loved” Lange’s performance.

Both Lange and Sarandon stumbled at the first annual Screen Actors Guild Awards, where thespians honored Foster in “Nell.” Still, Foster’s Oscar chances seemed iffy – given her fresh Best Actress victories for 1988’s “The Accused” and 1991’s “The Silence of the Lambs.” Would the academy really throw her a third trophy at the ripe old age of 32?

When the big night finally arrived, odds-makers were giving Lange a slight edge over Foster, with Sarandon a distant third. (The other nominees were Miranda Richardson as the wife of poet T.S. Eliot in “Tom and Viv” and Winona Ryder in the fourth screen adaptation of the classic “Little Women.”) Reigning Best Actor Tom Hanks for “Philadelphia” (who would win again minutes later for “Forrest Gump”) opened the envelope and read Lange’s name. Despite this being her first success in the category after four prior losses, the audience gave her only the standard round of applause without a standing ovation. (Perhaps they were saving that for Hanks?) Lange delivered another set of heartfelt remarks, with a special thanks to co-star Tommy Lee Jones. Interestingly enough, Jones had also appeared opposite Sarandon in “The Client,” presumably making voting in that race especially difficult for him. Nonetheless, he seemed delighted by Lange’s victory.

As for Sarandon, she was gracious as ever upon being the Oscar bridesmaid yet again. Fortunately, it would be just a year later that she would finally nab the statuette for her role as nun working to abolish the death penalty in “Dead Man Walking.” She even managed to get the standing ovation that had eluded Lange. While continuing to work in feature films since that time, neither actress has been invited back to the Academy Awards as a nominee.

Getting back to this year’s Emmy Awards, the Lange-Sarandon showdown for Best TV Movie/Limited Series Actress looks to be one the evening’s mostly closely watched contests. Will Lange prevail again? Or will Sarandon get her revenge? Or will Gold Derby odds-on favorite Nicole Kidman defeat them both for her acclaimed work on “Big Little Lies?”

Nothing like a big little feud to spice up an awards show.