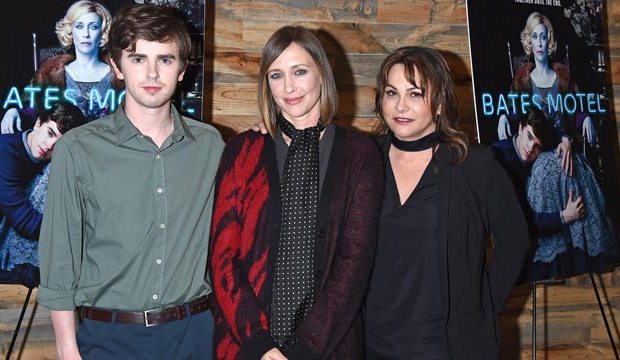 “It’s like the morning after something terrible has happened and you wake up and you think, ‘This is actually real, it’s all over,’” reflects Freddie Highmore about the series finale of “Bates Motel” in our recent webchat chat. Gold Derby also spoke with showrunner Kerry Ehrin about the end of the A&E drama, and you can watch both of our exclusive interviews below.

After five years playing serial killer Norman Bates to Vera Farmiga‘s Norma/Mother, Highmore admits, “I think it won’t hit me until a few months down the line. There’s a part of me that thinks, oh no, there’s still another season to come. We’ll just go back together and we’ll figure things out somehow, and we’ll pull through. I’m the ever optimist in Norman and Norma. The idea that, as he states in the finale, if you believe hard enough you can make it that way. I think I’m just trying to take that on myself.”

The final shot of the “Bates Motel” series finale is a tragic one, but also oddly hopeful, as we see the tombstone of Norma and Norman that implies they’re finally together. The inspiration for that image “came from ‘Wuthering Heights,’” reveals Ehrin. “It’s a book that has in a lot of ways influenced the show because it’s about a very unnatural love that these two people have that couldn’t really exist in the real world.”

Ehrin confirms that what is unsaid about that final image is that it’s Dylan (Max Thieriot) who made sure that his brother Norman was buried next to his mother Norma. “And also we thought that what was inscribed on Norman’s tombstone would also be Dylan, out of respect for people who Norman had murdered. That he wanted to make a very simple epitaph and he couldn’t make it too flowery. It’s like a respectful ending for Norman, and in my head that’s what Dylan would have chosen to put on that stone.”