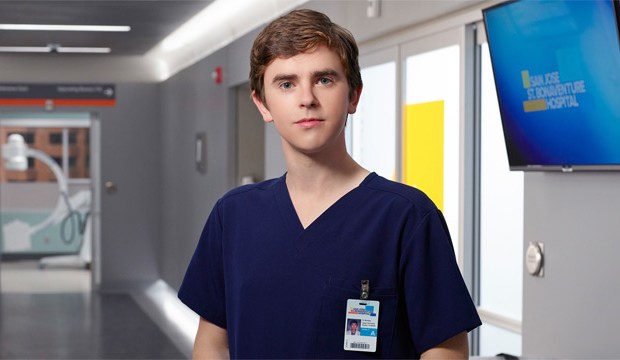 Freddie Highmore is on track to parlay the breakout success of ABC’s “The Good Doctor,” TV’s #1 new drama series, into his first nomination at the Golden Globes. According to predictions by Gold Derby’s staff editors, he has 9/1 odds to make the list. As his fiercest rivals for Best TV Drama Actor — Sterling K. Brown (“This Is Us”) and James Franco (“The Deuce”) — already have awards from the Hollywood Foreign Press Assn. on their mantles — Highmore could well win for his acclaimed performance as autistic doctor Shaun Murphy. Brown won in the catch-all supporting actor category last year for “The People v. O.J. Simpson” while Franco won for the 2001 telefilm “James Dean.”

Franco is but one example of the love that HFPA members show the the hottest new TV stars and programs. “The Good Doctor” reaches new heights in the ratings every week and is one of the most buzzed-about series of the fall TV season.

And Highmore is coming off of five years as the star of the A&E drama “Bates Motel.” While he never reaped a Golden Globe bid for his work as the young Norman Bates in his pre-“Psycho” days, he did get the attention of the Broadcast TV Journalists Assn. and contended in both 2014 and 2015 at the Critics’ Choice Awards. He lost that first race to Matthew McConaughey (“True Detective”) and the second to Bob Odenkirk (“Better Call Saul”). The latter could well reap his third consecutive Globe bid for this AMC series.

While all of last year’s Best TV Drama Actor nominees are eligible this year, newcomers like Highmore, Brown and Franco are all but certain to bounce some of them from the race. Who is the most vulnerable? Billy Bob Thornton won for the first season of “Goliath,” Rami Malek was nominated for season two of “Mr. Robot”) and both Matthew Rhys (“The Americans”) and Liev Schreiber (“Ray Donovan”) contended for the fourth seasons of their shows.