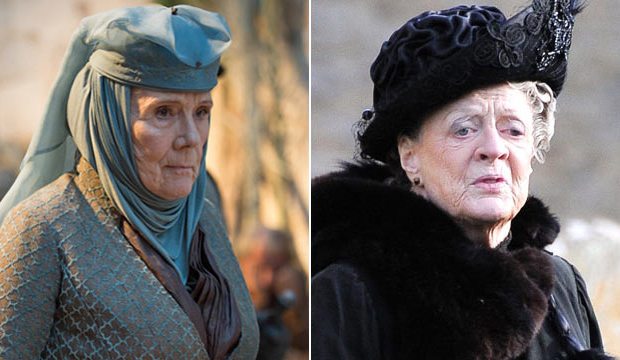 If you’re all caught up on “Game of Thrones” Season 7, you know that a major character was killed off on Sunday’s episode, titled “The Queen’s Justice.” If you are NOT up to date, then stop what you’re doing and read our recap right here!

While Diana Rigg‘s Lady Olenna Tyrell was beloved for her prickly nature, it was the Queen of Thorns’ last sting — her confession to Jaime (Nikolaj Coster-Waldau) that she killed Joffrey, and that she wanted Cersei (Lena Headey) “to know it was me” — that sent our TV forums into a frenzy. Our readers were so impressed with Olenna’s swan song that ThePerksOfBeingAGriff even declared that she’s the best character at delivering one-liners, even more so than Maggie Smith‘s Dowager Countess (“Downton Abbey”).

What did YOU think of Rigg’s final scene as Lady Olenna? And will the acclaimed actress finally win an Emmy for this role after three prior losses as Best Drama Guest Actress in 2013, 2014 and 2015? Below, read many of our readers’ unfiltered reactions, and then be sure to join the discussion to give us your own thoughts.

ThePerksOfBeingAGriff: “Diana Rigg better win with this tape. There is no character better at delivering a line than her. Sorry Maggie Smith in ‘Downton Abbey.'”

Reis: “Diana Rigg and Lena Headey overshadowed everyone else! Excited for the next week’s episode.”

pulp50: “Well, we can all go ahead and put Diana Rigg in our predictions. I’m going to miss her so much. I loved the episode.”

Atypical: “DAME RIGGGGG! I’ll miss you dearly. Go and get your Emmy win next year.”

emmygrammyoscartony: “That last scene gave me everything, and it is my favorite scene of the season thus far. Diana Rigg has been ACES on this show as Lady Tyrell, and I hope she wins an Emmy next year for this episode. I am going to miss that old bag of wonderful.”

Mihael Crncec: “If Diana Rigg doesn’t win the Emmy next year (and I don’t see that happening), I will lose it. She was just unbelievable. She stayed the Queen of Thorns until the very end. You will be missed, Lady Olenna.”

AayaanUpadhyaya: “DAME DIANA BETTER WIN THAT GUEST ACTRESS EMMY. This is the best she’s ever been on the show and I love that the show gave her the grand exit she deserves. I even got a little emotional in the end, and if this is how the Queen of Thorns goes out in the books as well, it’ll make for a great end to her arc. I think she is probably a lock to win now, especially since she doesn’t have to worry about splitting any vote.”

Andrew D: “Last night’s episode was great …. So mad about Lady Olenna and Ellaria … I love the Queen of Thornes , I think she was my fave all around. Happy to see her stab Cersai one last time. Could Diana Rigg win Guest?”