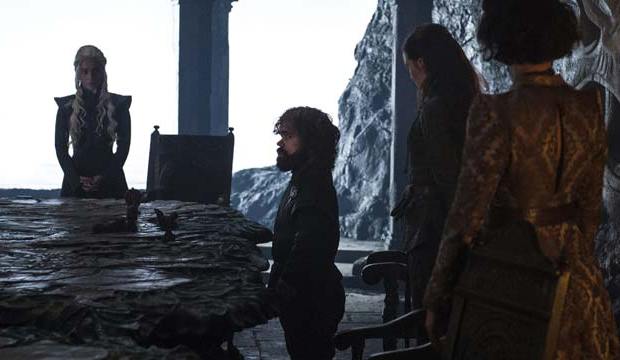 HBO’s “Game of Thrones” quickened the pace and turned up the action in its second episode of Season Seven on Sunday night. Those antsy from the premiere surely found much to enjoy in this hour thanks to the return of familiar faces and a gruesome sea battle. Here are the top six moments from “Stormborn.”

Who Will Bring the Dawn? – The episode opens on Dragonstone in the middle of a storm. “On a night like this, you came into the world” Varys (Conleth Hill) remarks to Daenerys (Emilia Clarke). Detail-obsessed viewers will remember the “born of smoke and salt” requirement of the Prince Who Was Promised prophecy. Conveniently, Melisandre (Carice Van Houten) arrives to try and convince Dany to meet with Jon (Kit Harington). She mentions, in Valyrian, that “The prince who was promised will bring the dawn.” Dany retorts that she is no prince, but Missandei informs her that the word is not gendered in Valyrian, and could translate to “prince” or “princes.” Since Melisandre is clearly trying to unite Jon and Dany, perhaps she is convinced the prophecy involves them both.

Be a Dragon – Daenerys and her advisors sit in the war room to discuss their plan of attack. Yara (Gemma Whalen) and Ellaria (Indira Varma) favor attacking King’s Landing head on. But Dany holds on to her dream of peaceful rule and favors Tyrion’s (Peter Dinklage) plan. Dornish and Tyrell forces will surround King’s Landing to starve out the crown, while the Unsullied and Dothraki take House Lannister’s seat of power: Casterly Rock. Olenna (Diana Rigg) quietly tells Daenerys to ignore all the “clever men” who would advise her. “You’re not a sheep, you’re a dragon” Olenna commands, “be a dragon.”

Treating Jorah – Sam (John Bradley) finds an experimental procedure to cure Jorah’s (Iain Glen) greyscale, but the archmaester informs him that it is forbidden due to the likelihood of contracting greyscale. But Sam feels honor bound to help the son of the mutinied Jeor Mormont and carries out the procedure in secret. Jorah chugs whiskey and chomps down on a bit, so as not to scream, while Sam slowly cuts off the affected layers of skin and applies a special ointment. It’s unclear if the gruesome looking treatment will be successful.

The Lone Wolf – Arya (Maisie Williams) stumbles across her old friend Hot Pie in a tavern. While she scarfs down some free bread and ale, Hot Pie wonders aloud why she is heading to King’s Landing instead of Winterfell. Arya is shocked to hear that Jon defeated Ramsay in battle and is now the King of the North. She sets out at once for Winterfell, and encounters another old friend: her direwolf Nymeria, who now runs with a fearsome pack of wolves. Arya asks her old pet to come north with her, but Nymeria turns and leaves. The young stark smiles, realizing both she and her wolf have grown accustomed to living on their own.

Queen of the North – Jon announces that Daenerys sent a letter requesting his presence and Sam sent a letter regarding the mountain of dragonglass under Dragonstone (someone call PETA, the Westeros ravens are definitely overworked). He tells the Northern houses that he will head to Dragonstone to convince Dany and her dragons to fight with him against the Night King. Sansa (Sophie Turner) publicly clashes with her brother once again, pointing out that Daenerys’ father sent a similar request to their grandfather and incinerated him upon arrival. But Jon is firm in his quest to prepare for the army of the dead and heads south, leaving Sansa to rule the North in his absence.

Euron’s Assault – As Yara escorts Ellaria to Sunspear, Euron (Pilou Asbaek) and his fleet attacks without warning. Euron and his men board the ship and an epic clash of swords ensues as ships are reduced to flaming rubble around them. Euron brutally murders Obara and Nymeria Sand with their own weapons, while Ellaria and Tyene Sand were captured. Yara dispatches as many men as she can before taking on her uncle in battle, but she is eventually overtaken. Euron calls out to Theon (Alfie Allen) to come save his sister, but the horrors of war trigger Theon’s memories of being tortured by Ramsay. Reverting to “Reek” Theon looks his sister in the eyes before jumping overboard to save himself while Euron cackles with Yara in his clutches.