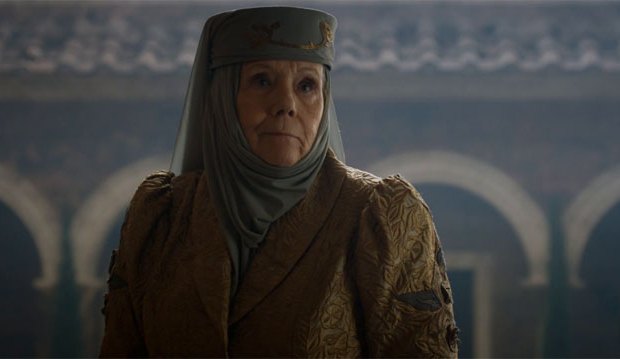 No one can accuse “Game of Thrones” of a sluggish pace. In the third episode of Season 7, the King of the North has already arrived at Dragonstone, and the meeting between him and the Mother of Dragons that fans have speculated about for years is finally here. This jam-packed episode also gave viewers another unexpected reunion, confirmed Jorah is healed of Grayscale, and revealed a secret that one character had been sitting on for three seasons. Here are the six most epic moments from “The Queen’s Justice.”

The Spider and the Witch – Melisandre (Carice van Houten) spies Jon Snow (Kit Harington) arriving at the shores of Dragonstone from a faraway vantage point. Varys (Conleth Hill) appears behind her, commenting that it’s “strange” how she advocated for Jon to be invited yet “when he arrives you hide on a cliff.” Suspicious of Melisandre’s intentions and how her involvement with Jon ended, he urges her to reach her intended destination of Volantis and never return to Westeros. “I’m not sure you’d be safe here,” he threatens. But the Red Woman insists she will return one last time: “I have to die in this strange country, just like you.”

Cersei’s Prisoner – Euron (Pilou Asbaek) parades the captives Yara (Gemma Whelan), Ellaria Sand (Indira Varma), and Tyene Sand (Jessica Henwick) through the streets of King’s Landing, where the citizens taunt and throw debris at them in a cruel mirroring of Cersei’s walk of shame in “Mother’s Mercy.” When Cersei (Lena Headey) is presented with Ellaria, who killed Cersei’s only daughter Myrcella, the vengeful queen agrees to marry Euron “when the war is won.” With Ellaria and Tyene chained to opposite walls of a prison cell, Cersei admits to staying awake at night thinking of ways to kill the Dornish women. Then she plants a kiss on Tyene and takes a potion. Cersei laced her own lips with “The Long Farewell,” the same poison Ellaria used to murder Myrcella, and dooms Ellaria to watch her daughter die just out of arm’s reach.

Fire and Ice Meet – The first meeting between Daenerys (Emilia Clarke) and Jon is thrilling, but does not go to plan for either ruler. Jon refuses to bend the knee to a woman he doesn’t know, and Dany does not believe, nor does she have much interest, in Jon’s fanciful tale of the Night King and his army of the dead. But after consulting with Tyrion (Peter Dinklage), Jon comes around to asking for something more reasonable: dragonglass that can be mined from Dragonstone and used to make weapons that will kill White Walkers. The imp convinces Dany that providing Jon with the substance could be a stepping stone towards a fruitful alliance. She relents and allows Jon to mine the dragonglass, though she remains curious about Ser Davos’s revelation that Jon took a knife to the heart.

Bran is Home – With Jon gone, Sansa (Sophie Turner) is busy keeping Winterfell in order. Of chief concern is that the stronghold does not have enough food to feed any additional soldiers for the winter. She is in the middle of receiving some sage advice from Littlefinger about “fighting every battle everywhere” when none other than her brother Bran (Isaac Hempstead Wright) arrives at the gates. The Stark children have a teary reunion, but Bran seems oddly distant. The pair sit by the weirwood tree as he tries to explain his new role as the Three Eyed Raven to his sister, but she doesn’t understand. So Bran demonstrates his all-seeing powers by describing her wedding to Ramsay and apologizing for all that has happened to her.

Siege of Casterly Rock – Grey Worm (Jacob Anderson) leads the army of Unsullied to take the Lannister stronghold Casterly Rock. Thanks to a secret sewer passage Tyrion had built to escort women into the castle, the army easily overtakes the Lannister forces inside. But the win is too easy. Grey Worm demands to know where the rest of the Lannister forces are hidden, only to see Euron arrive with his fleet, laying waste to the Unsullied ships in the harbor. Daenerys was hoping for a win after losing Yara’s armada, but now one of her most lethal armies is trapped in the west.

The Queen of Thorns’ Last Sting – Jaime (Nikolaj Coster-Waldau) took the majority of the Lannister army to Highgarden, home of House Tyrell, an important source of wealth and crops. The southern castle is so easily overtaken that no battle scene is even shown, just Jaime marching to Olenna Tyrell’s (Diana Rigg) quarters. Jaime was never much of a wordsmith, providing the Queen of Thorns an easy target to sass into submission and giving a fantastic potential Emmy submission for Rigg. After enduring her barbs, Jaime empties a vial of poison into Olenna’s wine. She gulps it down and inquires if there will be any pain. Jaime says no. “Good. I’d hate to die like your son, foaming at the mouth,” she says. The violence of Joffrey’s death was not as she intended having not seen the poison in action before, and thus Olenna reveals as her parting shot that she was the one who killed Cersei and Jaime’s sadistic son, not Sansa and Tyrion as they had believed. Olenna revels in the revealing her trump card. “Tell Cersei,” she says with a grin, “I want her to know it was me.”